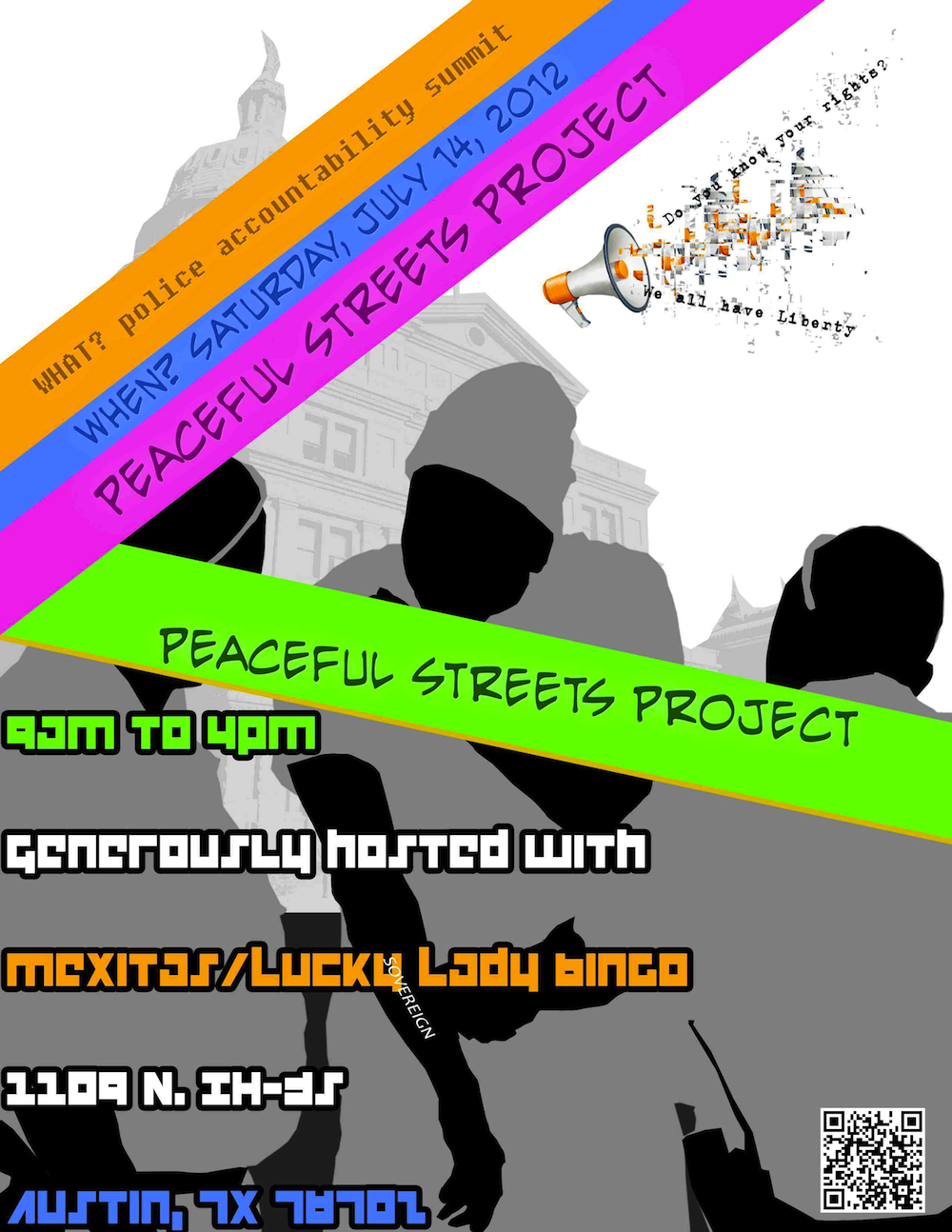 “Protect and serve each other” – Peaceful Streets Project

What is the Peaceful Streets Project?

The Peaceful Streets Project is a volunteer, grassroots undertaking uniting Austinites behind the common goal of ending the institutional violence taking place on Austin streets. Through organizing, training, and direct action tactics, the Peaceful Streets Project seeks to support marginalized communities in understanding, exercising, and standing up for their rights.

In order to accomplish these goals, the Peaceful Streets Project is undertaking the following actions:

Through these actions, the Peaceful Streets Project aims to create a more just and peaceful Austin free of institutionalized violence. The Project is currently looking for volunteers as well as donors and sponsors to help us make this ambitious effort possible.

On New Year’s Day, I observed two cops abusing a female who had committed no crime or presented any threat to anyone. I began to take pictures and ask questions of the cops, and for that I was assaulted and then arrested under the false claim of spitting in the face of the cop who had assaulted me. Fortunately for me, witnesses to what happened stepped forward, including one who videotaped the incident from across the street. Unfortunately, not everyone who is a victim of police abuse has someone videotaping them to protect them from the lies of corrupt cops. That’s why we decided to launch the Peaceful Streets Project. Over the next month we are going to bring out stories of police misconduct and abuse in Central Texas in an effort to make people aware of the pervasiveness of this problem, we are going to hold a half dozen Know Your Rights training sessions to give people the tools they need to stand up for their rights and for the rights of others, and we are going to hold a police accountability summit to galvanize the community as we stand up to corruption. At the end of the conference we will give out 100 video cameras to activists here in Austin as a first step toward creating an army of individuals who will record the police in order to protect their fellow citizens from violence. I hope you can support us in our cause.

Your financial support is needed to help make the Peaceful Streets Project a success!

Below Clyde Voluntaryist, founder of NeverTakeAPlea.org and CopBlock.org contributor, interviews Buehler about the incident that led to the creation of the Peaceful Streets Project, and the direction of the organization.