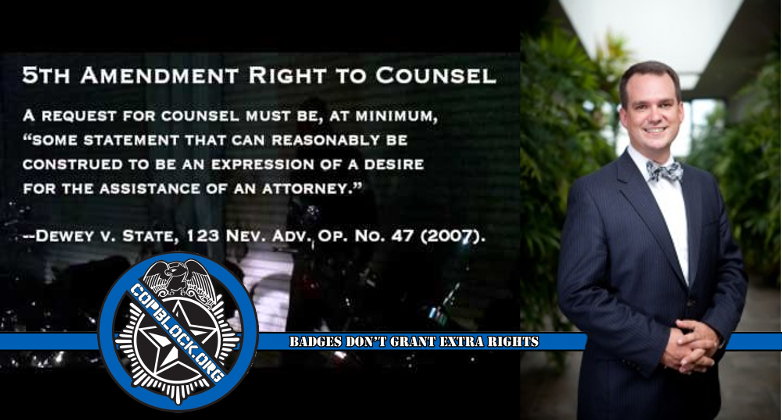 Tomorrow, March 23rd, Las Vegas attorney Stephen Stubbs will be holding a “know your rights” seminar primarily in response to recent harassment of motorcycle riders in Las Vegas by the LVMPD (“Metro”) using saturation teams and the gang task force, including a “motorcycle intelligence unit” specifically used to gather information on motorcycle clubs.

As Stubbs mentions in the Facebook Live video embedded below, this harassment has involved the profiling of people that ride motorcycles and several violations of those people’s rights. That includes manufacturing suspicion to stop them, attempting to force passengers to ID themselves, and detaining them longer than is required to perform an investigation related to the (often dubious) offense that they have been stopped for.

Obviously, the motivation behind these targeted stops and the attempts to question those stopped is to gather information about motorcycle clubs under the false pretense that anybody belonging to a motorcycle club is a criminal and the even more flawed pretense that anyone riding a motorcycle and/or fitting a certain description must belong to a motorcycle club. Beyond that, Metro has also been known in recent years to illegally put pressure on public businesses, such as bars, to attempt to force them to exclude members of bike clubs from those businesses. This often is done under the threat of having their liquor license taken away.

As regular readers of the CopBlock Network know, Stephen Stubbs has a pretty long history (see “related posts” section below) of defending the civil rights of people (including himself) against the police, especially those departments located within the Las Vegas area. That has included defending motorcyclists against the frequent harassment they receive from the LVMPD.

Stubbs has also in the past done know your rights seminars numerous times at events and for various groups (as well as independently) throughout the Las Vegas area. (See below for an embedded video of a previous know your rights training.) Among other things, these seminars typically will cover issues involving the First, Fourth, and Fifth Amendments such as the requirements for a legal detainment, when you are obligated to identify yourself to police, your rights when the police want to search you, your right to remain silent and why that’s a good idea, and your rights when filming the police (and why that’s also always a good idea).

In spite of the direct motivation for this particular know your rights seminar being the harassment directed at motorcyclists, the topics and rights being discussed will not be exclusive to cyclists and can be applied to anyone that is stopped by the police.

The following information is included within the Facebook event description (which can be found here):

LVMPD made it very clear this week that they are starting up their motorcycle saturation enforcements again. People are being stopped on motorcycles for LVMPD’s intelligence gathering efforts and as a show of force.

Attend this seminar to learn your Constitutional rights, the proper way to handle traffic stops, and the laws that can protect you. You have to know your rights before you can use them. Everyone is welcome.

LVMPD doesn’t care about the law

Those of you that have followed CopBlock.org over the past several years are probably already aware that Stephen Stubbs has been featured numerous times on the Cop Block Network. He often represents bikers and motorcycle organizations, whom are frequent targets of harassment from the police. In addition, I have personally worked with Stephen on a somewhat regular basis through Nevada Cop Block on issues or cases within the Las Vegas area.