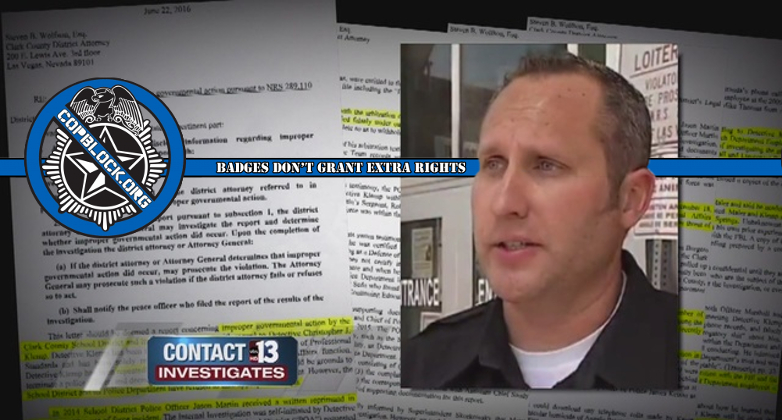 Last June, I posted about the case in which the head of Internal Affairs for the Clark County School District Police Department was being investigated. In short, Detective Christopher Klemp, the guy in charge of investigating school cops in Las Vegas when they’ve been accused of misconduct, was himself being investigated for threatening other officers and suppressing evidence in order to influence investigations he had taken part in.

Part of that investigation included audio recordings of phone calls between Detective Klemp and one of the Lieutenants in the department in which he implicated himself and discussing open cases (which is itself prohibited). Not surprisingly with evidence like that, the result of that investigation was that all of the charges against Klemp were upheld. However, Klemp filed a grievance through the Las Vegas police union.

That grievance was based on a clause in the union’s contract that the school district has to keep officers informed every thirty days during active investigations. Instead, the district notified Klemp of the final results of their investigation 33 days after their last notification. So, as a result, Kemp’s only punishment is to be removed as the head of Internal Affairs. He’ll still be working as a police officer for a local school.

But CCSD officials made their final notification three days late.

Though Klemp was removed from his position in Internal Affairs, he’ll be allowed to keep his job.

As Contact 13 first exposed in June, Detective Klemp disclosed confidential information about ongoing internal affairs investigations, told another officer to lie about the source of that information and threatened to come after him if he spoke the truth about it in the future.

All that was caught on an undercover recording made by a former school cop who filed a complaint against Klemp with the District Attorney.

On the recording, Klemp can be heard saying, “And if something happens and I got to I.A. you, if you say anything about this I’m going to call you a motherf—ing liar. And I’ll come at you like a whirlwind because I gotta protect myself.”

In a letter, the D.A. called Klemp’s conduct “highly concerning… especially how he so callously and repeatedly stated he would lie under oath.”

The letter goes on to say that Klemp’s statements “are more than inappropriate and should not go without review and subsequent punishment.”

A CCSD spokesperson says Klemp is working as assigned by the CCSD Police Department, and they can’t say more because everything else is part of his confidential personnel record.

So, while the DA claims that Detective Klemps actions should not go without punishment, that’s exactly what will happen. (I’m not entirely sure if it’s ironic or really appropriate that his new assignment is at a school for kids that have been expelled from regular schools for behavior issues.) In fact, based the past behavior of Las Vegas area school cops, Kemp is probably due a hefty promotion. BTW, I’d like to think this was an unintentional over-site, but the fact that Metro waited until Jesus Arevalo had submitted and gotten approved for disability (based on stress from being criticized for murdering Stanley Gibson) before “firing” him two weeks later, just tends to make me a bit skeptical of the motives of Las Vegas Police departments in these type of situations.