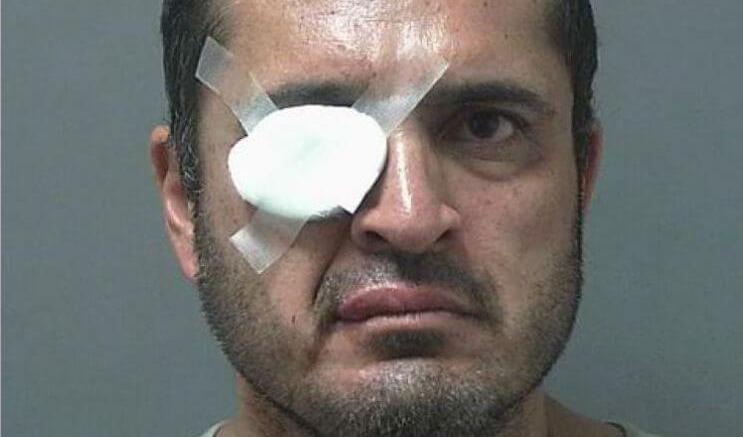 Officer Larry Leeds stopped Michael Valdez for riding his bike on the wrong side of the road, a victimless crime at best. The stop quickly turned violent after Leeds crashed into Valdez with his cruiser. Bystander video shows Leeds punch Valdez in the face.

Valdez, a convicted felon for fighting with police, spent 6 years in prison and claims the experience taught him everything he needed to know about resisting the police. He was paroled eight years ago.

Officer Leeds claimed that Valdez grabbed his crucifix chain and that he believed Valdez was going to use it as a weapon. For a police officer trained to arrest people who may resist and become combative, being afraid of religious jewelry is absolutely ridiculous. Valdez claims that if he did grab his crucifix necklace, it was only to say a prayer to God for protection.

He’s too dangerous to be a police officer – Michael Valdez

Valdez was taken to the hospital where he was treated for head trauma and diagnosed with “right globe injury with lens dislocation”. The globe is just a medical term for your eyeball and the lens is a biconvex  structure behind your pupil that helps refract light to your cornea. After this exam he was told to meet with an optometrist and booked into jail.

Obviously this is a serious injury and when I was a medic in the US Army the casualties that had injuries threatening life, limb or eyesight were moved to the top of the triage list and organized according. Even a prisoner of war should have their injuries treated to the fullest extent before being moved to detention if possible.

The lawsuit filed seeks unspecified damages for excessive force, violation of his civil rights, destruction of evidence, battery, and denial of medical care. It also claims the Hanford police and Kings County Jail destroyed evidence involving a bag of clothing that Valdez was carrying when he was arrested. After Valdez was booked, jail staff gave the items to the Hanford Police Department, which destroyed the items in June 2016, the lawsuit alleges.

Valdez and his lawyer also want the charges dropped and Officer Leeds charged with perjury and assault, as well as, an outside investigation from another law enforcement agency or grand jury.

The lawsuit claims the Leeds was waiting to ambush Valdez who was working on a fence, with his neighbor at his mothers house. Both Valdez and the neighbor remember a police cruiser creep down the street before doubling back and parking. When they were done with the fence Valdez left on his bike and Leeds began to chase him at a high rate of speed.

“I remember seeing the patrol car down the street, but I wasn’t doing anything wrong,” he said. “If I was, I could have just gone into my home and shut the door.”

The lawsuit claims that Leeds attempted to ram him with his cruiser causing Mr. Valdez to maneuver around him or get crushed. The lawsuit acknowledged that Mr. Valdez ignored Leeds orders to come to his vehicle but only because he feared for his safety after almost being ran over. Also Mr. Valdez had not committed a crime and was not obligated to interact with Officer Leeds.

Leeds continued to follow Mr. Valdez to a strip mall on 10th street where he then rammed Valdez with his cruiser causing him to slam his head, sending the bike flying into the air. He then exited the cruiser and pulled his weapon on Mr. Valdez who still had not committed a crime.

The lawsuit contends that Mr. Valdez was so stunned from being hit by the vehicle that he was unable to comprehend the commands issued by officer Leeds and never resisted his blows to the body, face and head but never attacked him either.

The injury cost Michael Valdez his livelihood. As a result of his blindness he is unable to work. He was a contractor before the assault but now is unable to even hammer a nail.

“Because I’m blind in one eye, I can’t even hit a nail, which was my bread and butter.

Even if found guilty of resisting arrest and drug possession, his attorneys believe he has a legitimate civil rights case for excessive force, due to the fact that Leeds used his cruiser to ram him over a bicycle infraction and proceeded to punch him. Also Valdez never resisted in any manner that would justify the amount of violence used to subdue Mr. Valdez.