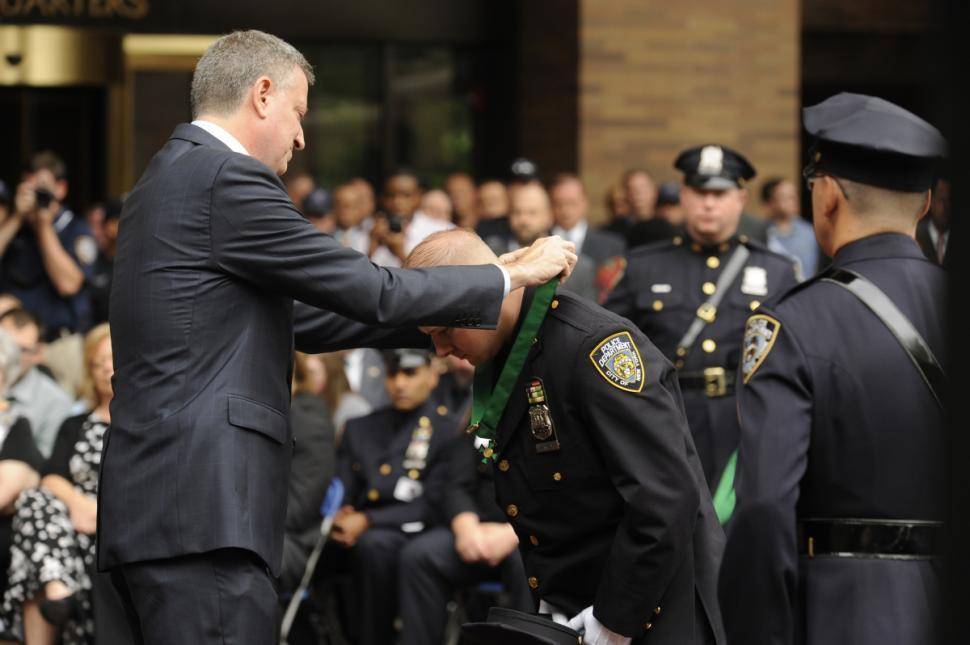 Almost exactly a year ago, I posted on the CopBlock Network about Officer Eugene Donnelly of the NYPD. As I reported then, within hours of having received an award for bravery at a June 2014 ceremony (pictured above) presided over by both Mayor De Blasio and former NYPD Commission Bill Bratton, Donnelly went out with a group of fellow officers to celebrate. That victory party culminated in him passing out drunk at a friend’s apartment in the Bronx.

However, that was not the end of the festivities for Officer Donnelly. Sometime during the night, he forced his way into an apartment within the same building, threw the woman who lived there to the ground while yelling about children and guns, and then hit her at least twenty times in the head, because he (apparently) thought she worked for Child Protective Services. After some unspecified amount of time, he then realized he had done some crazy shit and ran out of the apartment in nothing but a pair of black boxers. (See video embedded below.) Before that though, he reportedly added insult to injury by drinking milk out of his victim’s refrigerator – straight from the carton, no less.

He later tried to claim that all of this happened because he was sleep walking.

Eugene Donnelly, who gave the snoozy defense in court last week, is wearing only a pair of black boxers as he tries to flee a Bronx building where, moments earlier, he allegedly pummeled the total stranger.

Donnelly first enters the frame in the lobby at 5:43 a.m. and runs out to the street. He then tries to get back inside but is locked out and leaves again. When a cop car passes by, he goes back to the vestibule where he frantically rings buzzers.

Seconds before the damning footage, his alleged victim is seen running through the lobby in her bathrobe as she desperately tries to get away.

A day earlier, Donnelly had been given a Combat Cross by Police Commissioner Bill Bratton for ­arresting a gunman who fired at him in 2012.

Sources said he spent the night drinking before crashing at a fellow cop’s place in the victim’s building.

The 32-year-old woman, who asked not to be identified, shared details of the 2014 nightmare for the first time with The Post.

She said she was in bed when Donnelly kicked in her door wearing nothing but the shorts.

She ran toward the door, screaming, “Help!”

“He came rushing toward me and punched me in the face, hard enough to knock me to the floor,” she recalled.

He then got on top of her and continued hitting her, she said. “I was lying on the ground and he . . kept punching me, really fast, nonstop, pummeling me.

At one point, the fearful woman dialed 911, but was afraid to speak because he was still in the apartment.

When she heard him walk into her kitchen, she put on a bathrobe, ran out of her apartment and knocked on neighbors’ doors for help.

To sweeten the deal a little bit, Officer Donnelly also is facing a DWI charge from May of 2016. In that incident, Donnelly had to be pried out of his own car after it collided with three parked cars and flipped on its side. (See second video embedded below.) He was reportedly, according to witnesses, going 65 to 70 miles per hour on a city street prior to the collision.

These charges would probably tell you that Officer Donnelly has some serious issues with self control and either one of them would probably indicate that he’s a danger to the public when he inevitably loses control. So this is a guy you’d think should more than likely not be working as a cop and should even be given some sort of harsh punishment to discourage him from this type of behavior in the future.

Or not. Instead Donnelly will be sentenced to three years of probation as part of a plea deal and “could” be fired from the NYPD if he is convicted on the DWI charges, which have yet to go to trial. That’ll keep him on the straight and narrow.