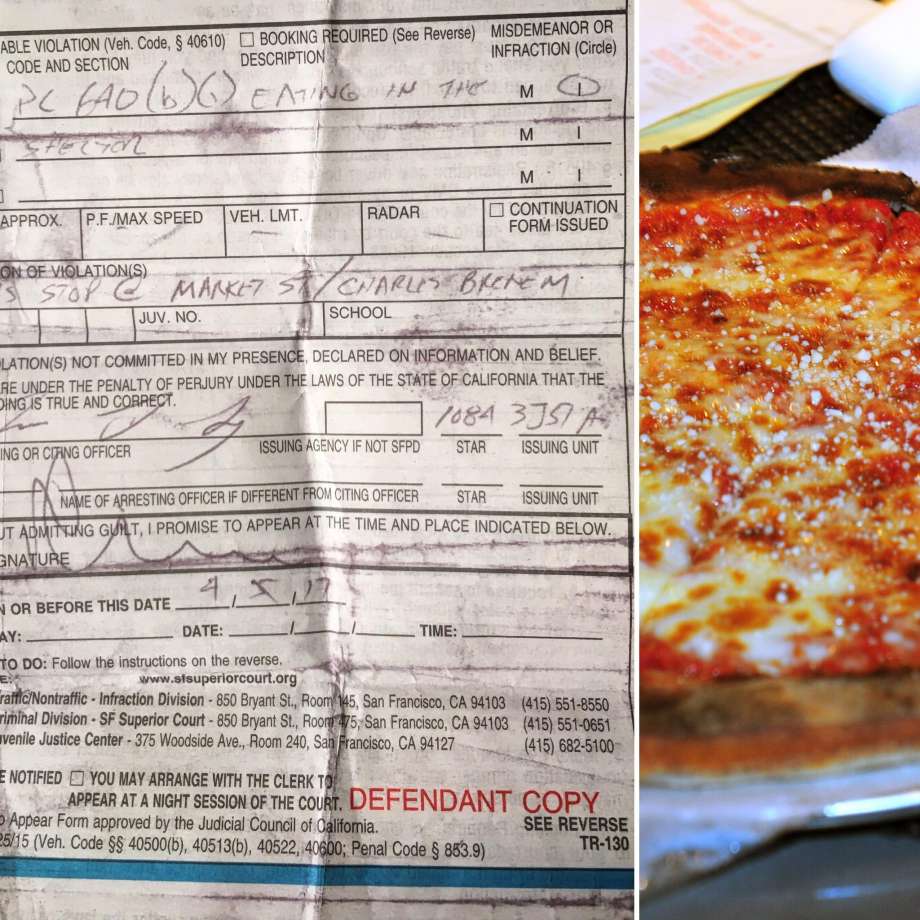 I wish I was making this up but I am not. In the police state of the USA a man – whose homeless nonetheless – was ticketed for eating a pizza slice while waiting for public transportation. According to SFgate.com:

In addition to all the other things that are against the law, there is eating at a bus stop.

A man who bought pizza for his companion on her birthday was cited for eating pizza at a bus stop at Market and Seventh streets in San Francisco.

“This is a real waste of police services,” said Kelley Cutler, an organizer with the Coalition on Homelessness.

According to Cutler, a police officer cited the man March 5 after he was observed eating pizza in the bus shelter. Eating on most public transit is prohibited but the rule is rarely enforced and Cutler said she could not recall it ever being enforced at a bus shelter.

The offense described on the citation is “eating in the shelter.”

Cutler said the man was more amused than outraged by the ticket.

“Some people get agitated or upset, but he was being a good sport,” Cutler said. “He laughed about it. He kept saying he bought the pizza for his friend on her birthday.”

The citation said the man is due in court Wednesday, but Cutler said the citation would likely be dismissed if the man can show court officials he is seeking homeless services. Her client was cited for violating an ordinance against “eating or drinking in or on a system facility or vehicle in areas where those activities are prohibited by that system,” which can carry a fine of $250.

Homeless outreach workers said Monday that they could not recall a similar instance of pizza prosecution, although another coalition worker did recall that a client of his had been cited some months ago for skateboarding on a Fulton Street sidewalk at 3 a.m., instead of in the street.

Muni spokesman Paul Rose said he didn’t know whether it was OK or not OK to eat at a bus shelter. He said that passengers can be cited for eating on vehicles and inside Muni Metro stations but that the “food prohibition doesn’t necessarily extend to bus shelters.”

The pizza citation, Cutler said, was what some authorities refer to as a “quality of life” enforcement.

I’m only surprised that the police didn’t confiscate the pizza as evidence so that I could write that they (the police) merely were hungry. Yet, there seems to be no logical explanation for why the police decided to address this ‘crime’ and waste their time harassing a homeless man. Would any of you taxpayers voluntarily pay for police to do such things? I know I wouldn’t…