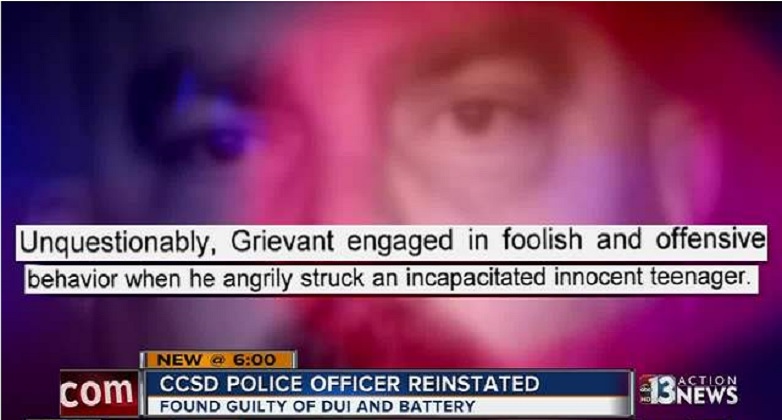 In October of 2015, I posted about Sgt. Anthony Russo of the Clark County School District Police Department. Russo was arrested after he got drunk, ran a red light, hit another car, assaulted the teenage driver of the car he had just crashed into at 60 mph, and then pulled a gun on witnesses who tried to intervene to stop his attack on a completely innocent person who was already “incapacitated” from being hit by some drunk maniac’s car.

At the time the Las Vegas Review Journal described the incident this way:

Troopers said Russo was at fault in the crash that escalated into fight where the off-duty school police sergeant drew his gun. He faces charges that include driving under the influence, failure to obey a traffic signal, possession of a firearm while under the influence of alcohol, drawing a deadly weapon in a threatening manner and two counts of battery, NHP said.

Witnesses said Russo ran a red light at the off-ramp while going about 60 mph before hitting the car, according to arrest records obtained by the Review-Journal. Bystanders went to check on the Hyundai’s passengers, and Russo, wearing “dress clothes,” punched the car’s passenger in the face three times.

When bystanders pulled Russo away from the passenger, he punched one of them in the face and lifted up his shirt, where his firearm was holstered. He pulled out his gun, and a female bystander stood between Russo and others at the scene, according to the arrest record.

That’s when Russo went back to his car.

The arrest record said he failed to take a field sobriety test. He was taken to University Medical Center — as were three other people involved in the crash. Troopers got a warrant to draw four vials of blood from Russo, the arrest record said. He was then booked into the Clark County Detention Center.

That’s obviously some outrageous shit for anyone, let alone a guy who is carrying a gun around a school and in fact already had a prior history of shooting children. There’s no way they could have just swept this under the rug. He had to have been in for some serious punishment after this. Amirite?

Rest assured officers, that’s not the case when you have one of those Magic Uniforms that renders you impervious to any sort of meaningful consequences for your actions, no matter how violent or outrageous they might be. Especially when you’re talking about a department that ruled officers covering up for cops that held an underage drinking party which led to one of the juvenile attendees killing a woman in a drunk driving accident was “within the scope of their duties.”

Not only were the laundry list of charges Sgt. Russo was originally facing reduced to two misdemeanors that resulted in just a fine and a temporary suspension of his license, but his firing has now been reversed. Apparently, according to an arbitrator, repeatedly punching a teenager and pulling a gun (while drunk) and threatening to shoot innocent people trying to stop him from committing assault on that innocent teenager doesn’t represent “a damaging impact to the workplace” or an indication of malice.  That workplace, of course is a building full of teenagers that he carries a gun around in. I can’t see any way his drunken rampage against an “innocent, incapacitated teenager” would be an indicator of some sort of potential workplace threat.

And he’s getting back pay for the two years he sat home. No word yet on whether he also will be getting reinstated as the head of the CCSD police union.