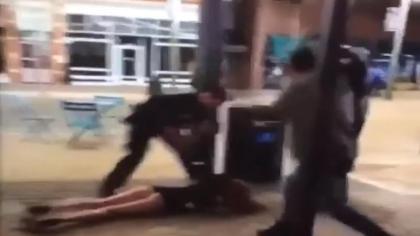 Ft. Collins, CO — Bystanders at Barstool Sports Bar near Colorado State University were treated to a front-row seat at what could easily be described as a World Wrestling Federation (WWF) takedown of a fragile woman by what could be characterized as a bully cop. But, of course, police see the altercation differently. You decide.When the video (taken by a bar-goer) begins, a woman can be seen arguing with a Ft. Collins police officer. But when one looks closely, the officer can be seen positioning his hands on the woman in such a way as to be able to effect a near perfect body slam. And flawless it was. The seemingly fragile woman who was dressed in a party dress and high heels was, as some have said, brutally smashed on the ground.

Those who were recording the video seemed to love the wild ride the woman took at the hands of police. But other, more level-headed ones, possibly ones not so inebriated by their beer, immediately cried foul. In the comments section of the Instagram video, viewers determined the aggressive actions on the part of the officer were simply unnecessary and potentially criminal.

One viewer wrote, “I never comment on shit like this. That cop belongs in a cage. That ruined my Sunday morning. Fuck that guy and for the record, I love the police and believe 99.99% of them are better people. This guy is an animal pig. Get that video to the authorities stat!!! If I was that girl’s Dad I’d go above the law and make him chicken on his own teeth.”

READ MORE:  Rothschilds Forcing Native Pygmies Off Their Own Land So the Elite Can Slaughter Elephants

Of course, the Ft. Collins Police Department is standing by their boy in blue. According to Denver’s News 7, “Fort Collins Police says one of their own used what they say is standard procedure when an officer slammed a woman to the ground in order to subdue her during an arrest Thursday evening.”

We at The Free Thought Project believe if that takedown move, which appears to be premeditated, is standard procedure, then all of Ft. Collins’ police officers need retraining. The unnamed police officer may even hate women, evidenced by the unnecessary brutality demonstrated in the video.

It’s unclear if he does indeed hate women, but as TFTP has demonstrated before, police often brutalize women during arrest procedures, seemingly not taking their size, stature, and weight into consideration when effecting an arrest. Cops also beat their wives and girlfriends at nearly double the national average — and this number is estimated to be much higher as many women are scared to report their spouse to the very departments in which their abusers work.

Another observant Instagram viewer may have heard the woman asking the police officer (if he can be called that) a question. “Listen closely! The poor girl is asking “what did I do” and then gets her face slammed into the ground! Pathetic Pig,” the viewer commented.

If this is modern policing, then we’d hate to see what they did to women in the good ole days. So, according to the department policy, since they see nothing wrong with the video below, if you ask one of their cops a question, you’re likely to have your face smashed into the concrete. Got it?

Fortunately, there’s video to accompany the woman’s claims she may have been violated. As we’ve encouraged all our followers to do, begin to film every police encounter you see, even if you’re not the subject of the investigation. Photography is not a crime, and without citizen videographers, there would be no proof to be able to put a cowardly cop behind bars for crimes from which the woman in the video appears to be a victim.