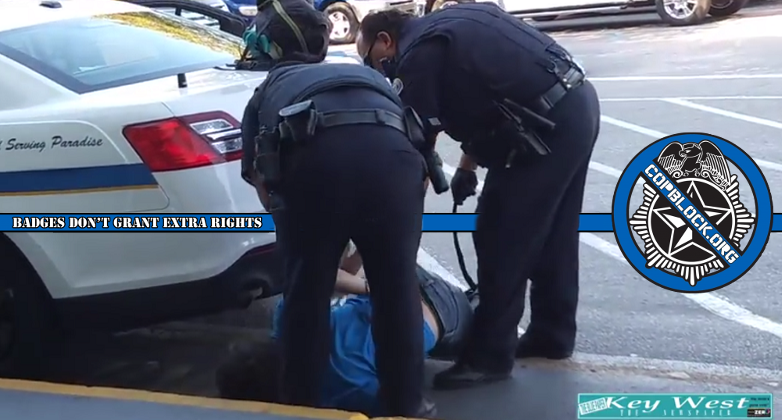 In a world in which police don’t just bristle at recordings of their activities, but also threaten curious bystanders and delete inconvenient evidence, a new generation of mobile apps is making it easier for people to work together to monitor the cops—and maybe even replace them.

The official line may be that it’s all “standard procedure,” but I’ll take a wild guess that Fort Collins, Colorado, police are not entirely thrilled about a video of one of their “progressive and professional” officers slamming a woman to the ground during a dispute outside a bar. Nor are Chicago cops delighted to have to explain in court a video of one of their officers shooting a teen in the back. And North Miami police have their hands full with a hard-to-fathom recording of a cop shooting the unarmed caretaker of an autistic man.

Such recordings are sufficiently awkward that police often refuse to use officially issued recording equipment to capture their interactions with the public—Los Angeles officers are habitually forgetful when it comes to using the cameras that are strapped to their bodies. Denver has had a similar problem, along with the sheriff’s department in Alameda County, California, and agencies elsewhere.

And when citizens record them, police have a bad habit of illegally ordering them to stop, and even seizing devices and deleting inconvenient evidence.

There’s not much the average person can do about cops who disable or damage cameras they’ve been issued. But private recordings are increasingly ubiquitous, and a bit more resistant to policy or police action.

The first step in recording official conduct is being on the scene. To that end, the Citizen app, available both at the App Store and Google Play, offers New York City residents “real-time alerts of crimes and other incidents near to your location.” Those incidents can be livestreamed through the app, too, and “up to 25 streams per incident are supported.” Citizen is actually a rebranding of Vigilante, a provocative name that got the app booted by Apple last year. The new marketing verbiage now emphasizes safety and community, rather than personal risk-taking.

But not everybody lives in New York City. That’s where location-independent software, such as Cell 411, comes in. “Cell 411 is ideal for use by activists, neighborhood watches, students, friends and other groups of people willing to organize themselves independently in order to manage and respond to emergencies.” Among those emergencies, creator Virgil Vaduva makes clear, are immigration raids and other encounters with law enforcement. He developed the app after being arrested during a protest and realizing he had no quick and easy way of summoning help. Users of the app can organize into networks to share messages, calls for assistance, video, and GPS coordinates. Cell 411 is available at both the App Store and Google Play.

Police have already made it clear they don’t like the app, with a PoliceOne reviewer claiming it “could prove deadly for civilians and law enforcement.”

So, now you’re at the scene because of your own curiosity or in response to a call for assistance by a friend or family member. You can record video with your phone, but what’s the best way to distribute that footage before it suffers a mysterious erasure or the device it’s on has a close encounter with a heavy object?

The various ACLU affiliates are probably your best bet here. The Texas chapter recently rolled out ACLU Blue, an Apple and Android app that lets users record encounters with the police and share the video with the civil liberties group and with the app’s online community. Among other features, the app lets users lock their screens so that even if the device is snatched by the cops, recordings can’t be stopped or deleted.

ACLU Blue is essentially a more flexible and social media-friendly version of Mobile Justice, the app that ACLU chapters around the country have offered for several years for recording and sharing video of police misconduct with the organization’s lawyers. States from Arizona to Virginia offer implementations of that software, which also automatically transmits recordings to put them beyond the reach of camera-shy law enforcers.

Some apps aim to reduce police misconduct by bypassing police entirely. Vaduva’s ambition with Cell 411 is not just to empower people to resist the authorities, but to reduce the whole need for police by making it easier for networks to address emergencies as they arise “without appealing to the violence of the State.”

“Cell 411 has become almost an overnight sensation in South Africa, where thousands of users use it daily to keep each other safe,” he told Cointelegraph. “Farmers in SA have also contacted me about how the app is helping them organize themselves into self-policing communities due to the lack of police protection and corruption.”

More ambitious, because of the level of commitment required, are apps like Concrn, which promise “compassionate crisis response—by peers, for peers.” Pointing to the high incidence of violence when police are relied on to deal with homeless people, drunks, and the mentally ill, the app’s creators urge users to “to report your needs to trained responders who use compassion, communication, and non-violent conflict resolution.” Concrn is most active now in San Francisco, relying on trained volunteers. That’s an approach that, not surprisingly, has won less than total support from the powers-that-be, with Tenderloin Station Police Captain Teresa Ewins complaining, “I don’t think it’s good for the community to not call the police during crisis situations.”

Would she be prefer that volunteers just follow her officers and recorded their conduct?

Well, you can’t make everybody happy. But you can give them better tools for minimizing official misconduct, and for addressing problems on their own without having to involve cops at all.