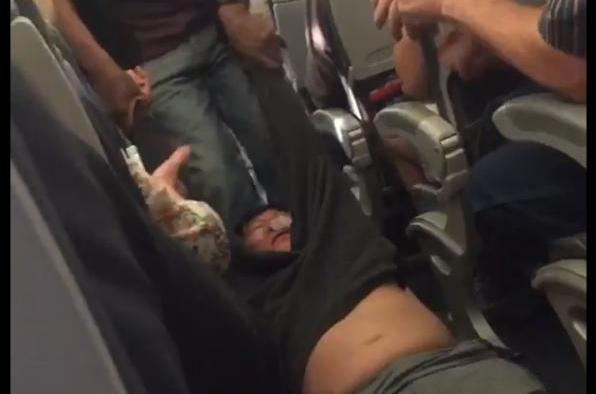 Video has emerged showing a Chicago Aviation Department police officer dragging a man off a United Airlines flight. That officer has now been placed on leave pending a Department of Transportation investigation.

According CBS Chicago, the man was removed from Flight 3411 prior to departure from O’Hare International Airport on Sunday. The plane was headed to Louisville, Kentucky.

Passengers on the flight said the crew had informed them that the plane had been overbooked and that the airline needed to get an employee to Louisville by Monday. The crew offered a free hotel room and $400 to anyone in exchange for their seat.

After no one decided to abandon their seat, the cash amount was raised to $800 but there were still no takers, passengers said. That’s when crew members picked four seats at random in order to seat the worker on route to Louisville, as well as three other standby employees.

According to passengers, the man who was dragged off the flight was a doctor that had patient appointments he needed to be present for on Monday. After he repeatedly refused to leave, he was grabbed by a Chicago Aviation Department police officer and forcibly removed.

Video taken from passengers on the plane shows the man screaming as he is dragged backward by his arms. Some passengers can be heard on the footage lamenting the officer’s actions stating that they were uncalled for. One passenger can be heard saying the airplane cop busted the man’s lip.

@United overbook #flight3411 and decided to force random passengers off the plane. Here’s how they did it: pic.twitter.com/QfefM8X2cW

According to the U.S. Department of Transportation, it is aware of the incident and is attempting to determine “whether the airline complied with the oversales rule.” Many airline tickets stipulate that in the event of an overbooking, passengers may have to obtain another flight.

“The Department is responsible for ensuring that airlines comply with the Department’s consumer protection regulations including its oversales rule,” a DOT statement said. “While it is legal for airlines to involuntary bump passengers from an oversold flight when there are not enough volunteers, it is the airline’s responsibility to determine its own fair boarding priorities.”

The officer seen in the footage dragging the passenger down the aisle has been placed on leave pending the outcome of an investigation, according to Aviation Department spokeswoman Karen Pride.

“The incident on United flight 3411 was not in accordance with our standard operating procedure,” Pride said. “The actions of the aviation security officer are obviously not condoned by the Department.”