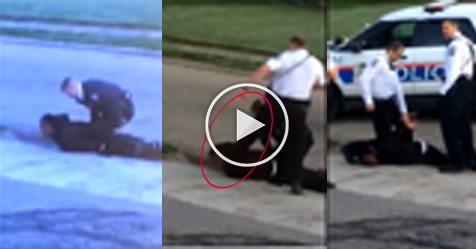 A Columbus police officer has been reassigned from patrol duty after video footage showed him stomp a handcuffed man in the head causing his face to collide with the pavement.

According to police reports, officers had apprehended 26-year-old Demarko Anderson on April 8 after he allegedly threatened to shoot people inside a home in the 3100 block of Maize Road. He then reportedly fled south onto the 800 block of Weldon Avenue.

Video filmed from the scene shows Anderson face down in custody with his hands cuffed behind his back before officer Zachary Rosen is seen running up and stomping him in the back of the head.

Following Anderson’s arrest he was charged with aggravated menacing, resisting arrest, obstructing official business, having weapons under disability and possession of controlled substances.

According to a statement prepared by the Columbus Police Department, Rosen has been placed on non-patrol duty for an unspecified length of time pending the outcome of an internal investigation.

“Based on what we see in the video taken on Saturday April 8, 2017, the action taken by one of our officers does not meet the standards by the Columbus Division of Police,” the statement said. “It appears to be inconsistent with the values and training we instill in our officers… We’ll learn more as the investigation continues and take appropriate actions based on the facts gathered.”

The statement continued to say that Rosen “self-reported a kick to the suspect while the suspect was in custody.”

Regarding Rosen’s police record, he was involved in the shooting death of Henry Green after the man reportedly opened fire on him and another plainclothes officer in 2016. It was later determined that Rosen’s actions were justified in the shooting.

The incident involving Anderson is illustrative of the cowardice some police officers exhibit during the course of their duties. The video footage makes clear that Rosen’s actions against a handcuffed and defenseless man were uncalled for.