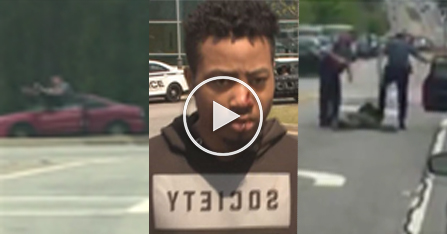 Two Gwinnett County, Georgia police officers have been fired following the release of footage showing them elbow and kick a man during a traffic stop.

According to police reports, 21-year-old Demetrius Hollins lacked a license plate, smelled of marijuana and “began to act strange” after he was pulled over near Lawrenceville for changing lanes several times without signaling.

Videos recorded by bystanders first show Sgt. Michael Bongiovanni pull Hollins out of a red car as he stands with his hands raised before the Sgt. rears back and elbows him in the face.

Footage then shows a handcuffed Hollins on the ground before officer Robert McDonald is seen running up and stomping the defenseless man in the head. In a similar incident earlier this week, a Columbus, S.C. officer stomped a handcuffed man in the head causing his face to collide with the pavement.

Both officers in the Georgia incident have been fired as a result of their actions. Gwinnett County police chief A. A. Ayers said Sgt. Bongiovanni concealed his misconduct from investigators. The chief called the incident “inexcusable.”

“What happened… at the hands of… officers was embarrassing not only to the Gwinnett County police but to all law enforcement,” Ayers said. “We hold our officers accountable for their actions.”

Of Bongiovanni, Ayers maintained, “We’ve been able to move swiftly to terminate this supervisor who not only stepped outside of his training and state law but he also failed to tell us what happened in the incident report and the use of force reports.”

As a result of the incident, both of Hollins’ cases, one from 2016 and the most recent one, have been dismissed by the county because of the involvement of the officers, according to the Gwinnett County Solicitor’s office.

Hollins’ attorney Justin Miller said his client was taken from the country jail to a hospital following his arrest. The two are now contemplating a lawsuit against the county. Hollins emerged from jail with a bloodied noose and lip on Thursday offering only a brief statement.

“My name is Demetrius Hollins and all I can say is I wish this never happened to me,” he said.