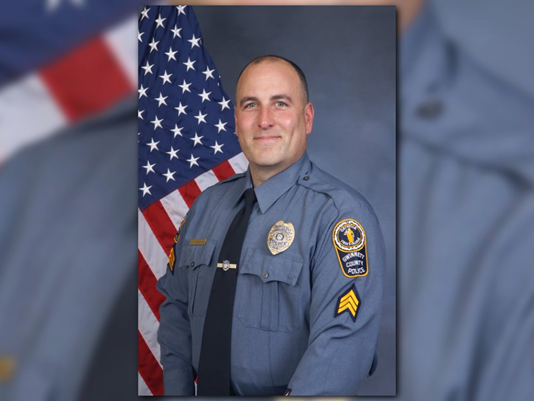 The “Thin Blue Line” is what cops will tell you they are. They say this because they feel they are the last line of defense between a chaotic society and a civilized one. Yet, anyone who’s spent any amount of time studying the police realize that the Thin Blue Line is nothing more than a brotherhood, a gang of sorts, that simply exists to protect from facing the same justice system they propel millions of others into.

Take the example of Gwinnett County Police Sgt Michael Bongiovanni, who was caught this week elbowing and kicking a man on video. From the blog post written and published here at CopBlock:

Videos recorded by bystanders first show Sgt. Michael Bongiovanni pull Hollins out of a red car as he stands with his hands raised before the Sgt. rears back and elbows him in the face.

Footage then shows a handcuffed Hollins on the ground before officer Robert McDonald is seen running up and stomping the defenseless man in the head. In a similar incident earlier this week, a Columbus, S.C. officer stomped a handcuffed man in the head causing his face to collide with the pavement.

Both officers in the Georgia incident have been fired as a result of their actions. Gwinnett County police chief A. A. Ayers said Sgt. Bongiovanni concealed his misconduct from investigators. The chief called the incident “inexcusable.”

While it’s a step in the right direction to hear the Chief say such events are “inexcusable” one has to wonder if those words are merely lip service. According to Slate.com it seems Bongiovanni has used excessive force in the past. The only difference seems that this incident was caught on video and impossible to cover up. From Slate:

Looking through those internal affairs investigations into Bongiovanni’s alleged public misconduct—all of which ultimately exonerated him—as well as his use of force reports makes for depressing and infuriating reading.

In multiple of the use of force reports stretching back to 1999, Bongiovanni admitted to punching suspects in the head (each event was considered lawful).

The actual misconduct complaints are even more troubling.

This is why you must always film the police.

Without clear video proof – or even audio – it is nearly impossible to have the word of a ‘civilian’ override the words written in a report by a LEO. The Gwinnett County Police Department released files showing that Bongiovanni had at least 67 use of force incident reports, 12 citizen misconduct complaints, and four administrative conduct investigations in the nearly 20 years he was an officer. In all of those times, he was apparently sanctioned just once. And that one time, wasn’t even for an act of misconduct against the public. (He was recommended for a demotion and ultimately a 15-day suspension in 2014 for the administrative crime of “failure to supervise and lead those under his command.”)

The only time Bongiovanni faced an actual punishment from the department is when he failed to brainwash others LEO’s into upholding the Thin Blue Line. So while it’s a good thing he’s finally off the force, one cannot praise the actions of the higher ups because it seems the buddy system is alive and well with the Gwinnett County. And before we can expect any real change we need to address the real problem. That’s cops refusing to out bad cops, as they did here for 20 years!