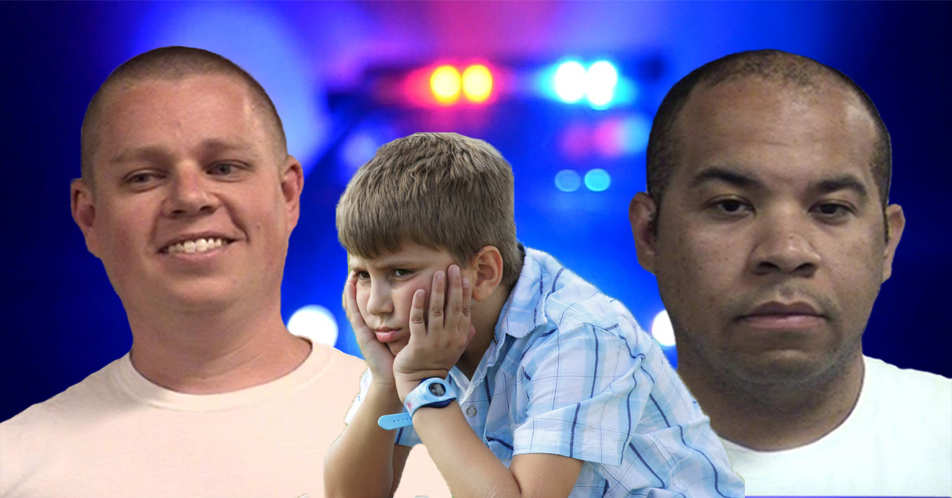 A Jefferson County, Kentucky grand jury indicted one former and one current Louisville Metro police officer on Wednesday for the sexual assault of minors at the department’s Youth Explorer Program.

According to the indictment, officer Brandon Wood allegedly abused a juvenile in 2011 and 2012, and former officer Kenneth Betts allegedly “engag[ed] in deviate sexual intercourse” (sodomy) through the use of “forcible compulsion” between April 1, 2007 and September 12, 2007.

Betts resigned from his position in April 2014 following accusations brought forth by alleged victims. Wood reportedly received a letter with intent to terminate on April 12, according to LMPD Chief Steve Conrad, who said Wednesday that while it is “frustrating,” he “cannot talk about the specific details of the Explorer case because of pending civil litigation.”

After a preliminary investigation into claims against the officers was taken over by Assistant Commonwealth’s Attorney Chris Foster, a lawsuit was filed by attorney David Yates on behalf of four of the alleged victims.

The lawsuit asserts Betts and Wood raped a male teen in homes, vehicles and other locations while he was in the Explorer program between 2011 and 2013. It also claims that the duo recorded the sexual acts and that the department attempted to cover up the case.

“I think the evidence is overwhelming that you had police officers in positions of authority over minors who did horrific acts towards the minors,” Yates said. “I think the evidence will show that they were on notice and no action was taken to stop the abuse or protect those minors or future minors.”

After the accusations came to light, officers reportedly falsified reports, deleted phone records and audio files and destroyed other records, according to the lawsuit. Higher ups in the department are also accused of a conspiracy to cover up the wrongdoing of their subordinates, refusing to comply with the Kentucky Open Records Act and concealing information from investigators by using intimidation.

It is also alleged that in 2013, Betts offered to handle a traffic citation for another teen, and give him money, in exchange for sex. This was revealed by the boy during the investigation of an alleged relationship Betts had with a 16-year-old female, who claimed he texted shirtless pictures to her and asked her to “make out” with him. Both teens were also participants in the Youth Explorer Program.

A probe launched by the Louisville Metro police department’s Professional Standards Unit into the girl’s claims found that Betts committed no criminal acts involving her. No investigation occurred regarding the claims made by the male teenager and Betts received no disciplinary action from the department, which closed that case when he resigned.

According to members of the Explorer Program, Wood’s interactions with teens as young as 14 were inappropriate. One member said the officer violated program rules by taking boys camping. Another said he further violated program rules by having boys over to his home. Yet another maintained that during a trip, Wood got drunk and inappropriately leaned against boys and put his head on their shoulders.

Following his indictment, Betts took to Facebook on Thursday to dispute the charges against him stating, “I would never do something to harm anyone or a program that did so [much] good.”

On Monday during his arraignment at Jefferson County court, Betts pleaded not guilty to both sodomy charges. He is currently out on bond and working as a code enforcement officer for the city of Rolling Hills where he only interacts with juveniles if they litter, loiter or commit some other ordinance violation. He is expected to return to court on June 19 and faces up to 20 years in prison for his most sever charge.

Meanwhile, attorneys for officer Wood said he will also fight his seven charges. He faces up to 35 years in prison and likewise entered a plea of not guilty during a Monday arraignment. The Louisville Metro Public Integrity Unit and FBI are still investigating the claims made by the two officers’ alleged victims.