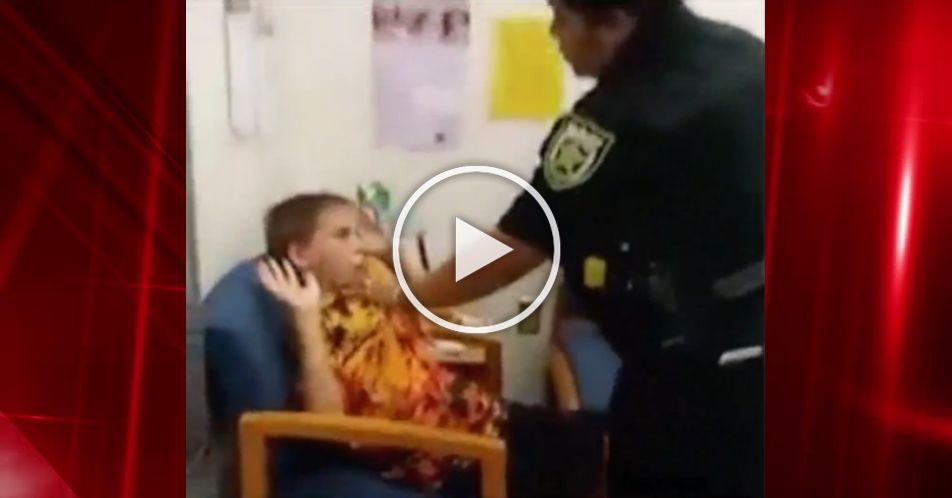 An autistic 10-year-old Florida boy was forced to spend the night in a juvenile detention facility after he was handcuffed and arrested by Okeechobee County school resource deputies last week.

According to the Luanne Haygood, her son, John Benji Haygood, suffers from autism. On footage she filmed from the scene, the boy can be seen sitting in a chair with his left hand covering his eyes, distressed, as his mother attempts to figure out why officers wish to arrest him.

“Does he have the same rights as an adult?” Luanne Haygood asks.

“He has a warrant,” one officer can be heard responding.

John can then be heard saying through tears that he doesn’t want to be touched as two officers take hold of his arms and handcuff him. According to Autism Speaks, not wanting to be touched can be a symptom of autism.

The boy continues to cry and cuss as the officer leads him out of the school building while his mother learns that he is being arrested for a November incident in which he is now charged with battery on a school employee for, a third-degree felony.

John’s mother said her son is accused of kicking a teacher because he did not feel safe, an incident “spurred” by his autism. She called the arrest heartbreaking.

“He has autism, he doesn’t know what’s going on,” Luanne Haygood can be heard telling one of the cops. “He has autism. He’s 10-years-old.”

According to a Okeechobee County sheriff’s office spokesperson, deputies couldn’t serve the warrant for the five month old incident any earlier because of the process involved is charging a juvenile with a felony crime. The spokesperson also said that the deputies were unaware that John suffers from autism.

Luanne Haygood maintains that cops and school employees need to be better prepared to deal with children with special needs however. She said, “unfortunately, instead of treating or accommodating, we arrest.”

The incident serves as a reminder of the age at which young people are indoctrinated into accepting the long arm of the police state. After spending the night at the Fort Pierce juvenile facility, John was released to his mother after a court appearance last Thursday.