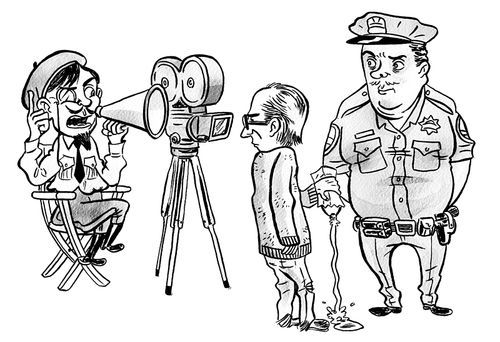 Planning on chugging down icy brews in Dolores Park this weekend? Recent crackdowns by the San Francisco Police Department have made Sunday beer-sipping a little more difficult, with penalties ranging from being forced to water the lawn with your precious beverage all the way to a citation. Now, your minor deviance could even contribute to research funded by the Department of Defense.

The Defense Advanced Research Projects Agency (DARPA) is responsible for doling out millions for research that, according to an agency mission statement, will “prevent strategic surprise from negatively impacting U.S. national security.” Their latest project, titled Good Stranger, involves S.F.’s finest — and, quite possibly, you.

In April 2012, researchers started tagging along with SFPD officers on their beats, recording video and audio of police interacting with the locals. This data is compiled for studies at the Stanford Research Institute and UC Santa Barbara that, according to Dr. Brian Lande, DARPA program manager, aim to examine the “interaction skills” people use to “make sense of and orient toward unfamiliar people, relationships, and social settings.”

DARPA plans to use the recordings in the development of a military training simulator that will use artificial intelligence to read and react to a trainee’s body language and facial expressions. DARPA is dumping $32.5 million into Good Stranger and related projects; the agency states that the training module will eventually be cheaper than arranging live role-players to train soldiers.

The SFPD insists all this only sounds a little Big Brother-y. “The point is to observe the officers’ behavior,” says Sgt. Michael Andraychak, who assures us that the research doesn’t encroach on civilians’ privacy. He also says, less comfortingly: “You have no expectation of privacy in a public space.”

DARPA hopes to learn how officers react to language barriers and cultural differences, and how their responses can de-escalate potentially volatile interactions. Andraychak says SFPD is “honored” to have been selected, and the departments will get more than just bragging rights — they’ll eventually receive one of those artificial intelligence training modules of their own.

Although you may have already unwittingly donated your body language to federal science, it’s possible to opt out in the future: If you notice someone filming you during your next traffic stop, you can request that the camera be switched off. Researchers are also banned from filming on private property. Dr. Lande adds, “The identities of those who participate … are to be anonymized and held confidentially.” However, the videos may be subpoenaed in court if they’re thought to document a crime, and the researchers themselves may be called as witnesses.

Geoffrey King, a local civil liberties lawyer who lectures on digital privacy law at UC Berkeley, notes, “Efforts to reduce uses of force are of course important and laudable,” though Good Stranger “raises serious privacy questions.” King encourages those filmed to file open government requests to procure any information gathered about them.

So sip surreptitiously, park drinkers — unless you’d like to set the standard of good stranger behavior for future soldiers.