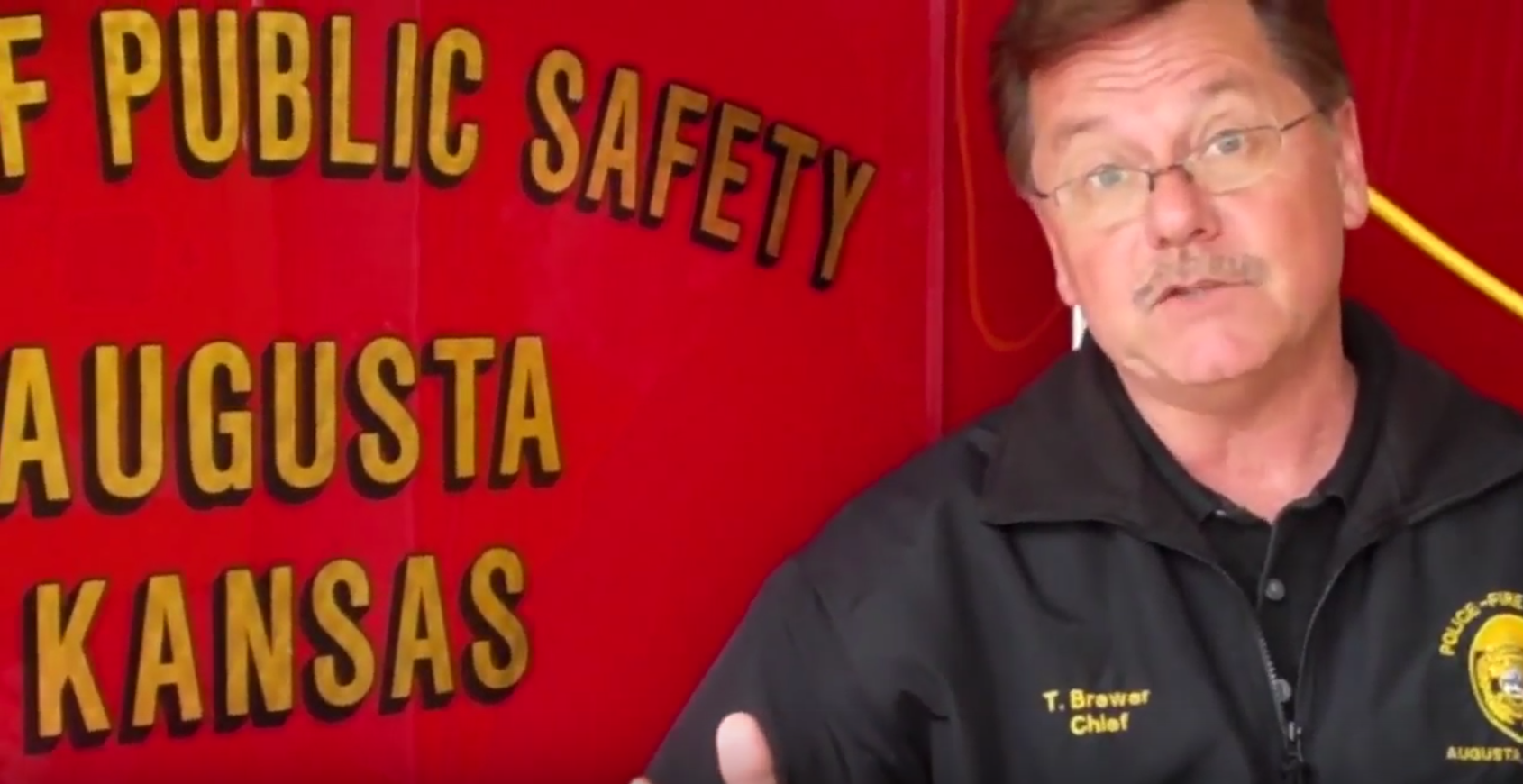 Originally published at the TheDailyHaze.com by Meko Haze

Thursday marked one week since an Augusta Police Officer shot and killed veteran Alan Fitzgerald’s service dog Midnite. Since the shooting, it was brought to attention that the dog had a history of attacks. After looking into the Augusta Police Department, it turns out Midnite is not the only one with a bad history.

In 1992, Augusta, Kansas Director of Department of Public Safety Kim Tyler Brewer was a police officer with the Wichita, Kansas Police Department. On that summer day, Major Brewer was part of security for Russian President Boris Yeltsin’s motorcade during a visit to Wichita. It was during that visit that Brewer would end up viciously beating a 95 lbs woman in front of her daughter and grandchildren.

On the morning of June 8, 1992, 46-year-old Marilyn Mick and her 23-year-old daughter Crissy Cochran decided to take Cochran’s two children to Derby. The two women stopped on their way by President Yeltsin’s motorcade.

The Secret Service worked together with the Wichita Police Department to provide security for the motorcade. At the intersection of Greenwich and Pawnee, two female officers told Mick and Cochran they had to park their car in an abandoned service lot until the motorcade passed.

Mick followed the instructions and pulled into the parking lot and faced west. Since it was hot that afternoon, Mick left her windows up, engine running, air conditioner on, and the radio playing. Shortly after parking, a police car pulled up and screeched to a halt in front of Mick’s Mercedes.

The President of Russia is Coming

Brewer was reported to have stepped out of the patrol car before it had come to a complete stop and charged at Mick’s Mercedes. Brewer opened the door and grabbed Mick by the arm and the neck, and “yanked” her out of the vehicle. Brewer threw Mick to the ground so hard that she hit her head. He then put his foot on her back and sat down in her car.

Brewer attempted to put Mick’s Mercedes into reverse, but instead, put it in drive, and the car “lurched forward.” Cochran, who was still in the vehicle grabbed the gear shift and threw it in park. As Brewer tried to move the car, he yelled, “Shut up. What the fuck is wrong with you? The President of Russia is coming.”

Brewer exited the vehicle and dragged Mick to the rear of the car by her arm. He then “stomped” on Mick’s back, and “placed his foot on her back, drove his knee into her lower back, and handcuffed her left wrist.” Court documents say Brewer then pulled Mick up “by the left arm and spun her around until she was airborne.”

Mick vs Brewer by The Daily Haze on Scribd

When Mick landed, Brewer grabbed her head and “smashed her face” into the trunk of the car and yelled, “What’s wrong with you, you fucking woman?”

While Brewer dragged Mick across the pavement, Cochran got out of the car, still holding one of her children. Cochran screamed, “You’re hurting my mother!” Her young child was said to be screaming and crying as well.

Cochran pleaded with Brewer to stop as she tried to cushion her mother’s face from the pavement and gravel as Brewer dragged Mick. Brewer then caused Cochran to fall over backward and lose grip of her child.

After Officer Meyers and Officer Scott Redpath left in the patrol car. That decision would later bring both officers into the lawsuit for not intervening on Brewer’s attack.  Brewer removed the handcuffs from Mick and asked if she was injured. Mick responded by saying she was not injured and was not charged with any crime.

Later, Mick’s husband took her to the hospital where it was discovered she had “suffered a sprained back, swollen and bruised wrists, multiple contusions, and internal bleeding of her kidneys.” Additionally, Mick alleged that she “suffered severe pain and post-traumatic stress disorder.”

Mick’s story was corroborated by Darrin Thorburn and Richard Evans, two witnesses who tried to intervene and prevent Brewer from continuing to attack Mick.

Evans, a postman who delivered mail in the area, brought his camera in hopes of getting pictures of President Yeltsin. Instead, Evans ended up taking pictures of Brewer assaulting Mick because he was “totally shocked and in a state of disbelief.” Evans and Thorburn tried to stop the attack, but were threatened with arrest by Officer Meyers and Officer Redpath.

On June 4, 1997, the Wichita Eagle released the story about the City of Wichita paying $142,500 to a Wichita woman to settle a 1992 brutality lawsuit brought against a former Wichita Police major.

By the time the lawsuit settled, Brewer had moved on to become the Chief of Police for Jefferson City, Missouri. Chief Tyler Brewer became chief for Jefferson City at the end of January, 1996, according to an employment law case at the beginning of his career in Jefferson City.

Brewer would not be Chief of Police for Jefferson City for long. In August of 1998, Brewer put in his resignation, but not by choice. Roughly two weeks prior, the Fraternal Order of Police held a vote of no-confidence over allegations of mismanagement and abuse. The vote ended with 67-5 against Brewer. The order behind the vote represented 79 of the 104 employees.

Despite having a history of abuse, on February 1, 2003, Brewer became the director for the Augusta Department of Public Safety. Instead of having three different entities, under ADPS there is a Police, Fire, and Rescue division. Brewer iremains in the same position still to this day.