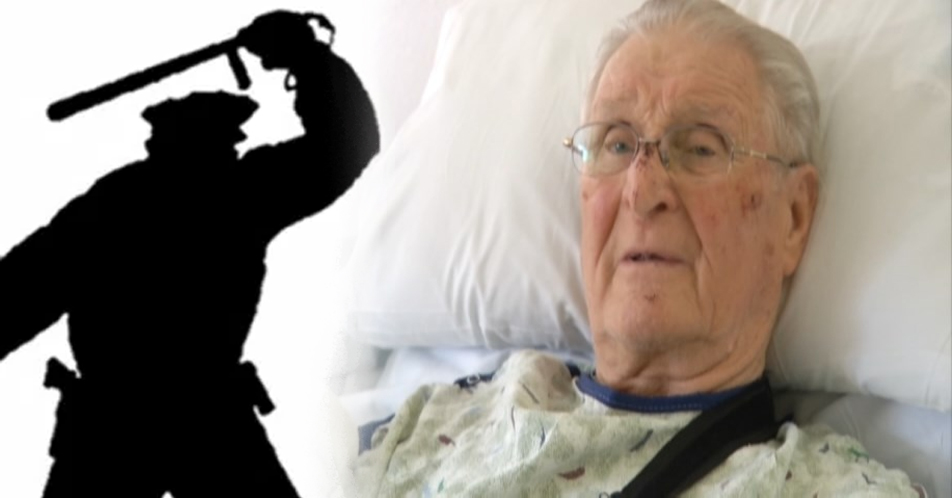 An 83-year-old man is headed to court for a resisting and obstructing felony charge received during an incident involving Michigan state police that was not recorded due to a malfunctioning dashboard camera that curiously didn’t capture any of his assault.

Owner and operator of Warner Township’s only bar for 51 years, Larry Sevenski said he was informed on St. Patrick’s Day by a patron that police were parked just outside his property waiting to pull over motorists suspected of drinking and driving. What happened next would leave Sevenski in the hospital with a broken nose and arm that required eight pins to repair.

According to Sevenski, he took off in his vehicle onto Highway 131 in order to look for the cop before turning onto Thumm Road. He then U-turned back onto Highway 131 and was pulled over from behind by a Michigan state trooper. Sevensk said he immediately pulled over, got out of his car and walked toward the patrol vehicle.

Sevenski denies attacking trooper Brock Artfitch. At a preliminary hearing in Antrim County District Court on Wednesday, Artfitch recounted his version of events, saying that he and his partner pulled over Sevenski for cutting the corner too close and failing to signal during the U-turn he made.

Artfitch testified that Sevenski walked quickly toward his patrol vehicle while pointing and shouting, “I’ve got a bone to pick with you.” Sevenski then ignored orders to return to his car and walked directly at the trooper, Artfitch said.

During the preliminary hearing, Artfitch maintained that he put his hand out and pushed on Sevenski’s chest in attempt to walk him back to his vehicle. He testified that he asked Sevenski if he had any weapons and said the elderly man responded, “I wish I had one.”

According to 28-year-old Artfitch, he then grabbed Sevenski’s left hand in order to pat him down and said Sevenski “squeezed” his hand “very tightly” and reared his right arm “back in a punching position.” That’s when a fearful Artfitch said he used an arm bar take-down on the old man.

The move left Sevenski’s nose bleeding and glasses chipped, presumably from his face smashing into the ground. Artfitch testified that he and his partner handcuffed Sevenski as he was screaming in pain that he had a broken arm. An ambulance was then called and EMTs began administering first aid to the man.

Sevenski was charged with resisting and obstructing police, a felony, and given a ticket for failing to use his turn signal. He was then taken to the hospital were he underwent surgery on his broken nose and arm, receiving eight pins in a shattered elbow.

“They said I couldn’t talk to them. I was breaking some kind of law, I don’t know. It got crazy, all at once,” Sevenski said. “They handcuffed me, and they hurt very bad because I have a reversed shoulder and I can’t put my arm behind my body. . . [I] just don’t know what I did wrong.”

At Wednesday’s preliminary hearing, District Judge Thomas Phillips found that there was enough evidence to send the case to trial in Circuit Court. One thing that could shed light on the situation is footage recorded by Artfitch’s dashboard camera. When Sevenski sought a copy of the video in order to vindicate himself however, he was told by Michigan state police that it could not be provided to him.

The missing footage was scantly mentioned during the preliminary hearing. What exactly happened to the footage is unknown. Michigan state trooper vehicles are equipped with cameras that automatically turn on when their flashing lights do. State police spokespeople have blamed the missing footage on “technical failure,” saying the camera eventually begin recording by the time paramedics were treating Sevenski.

“There was a technical failure with the video camera installed in the patrol vehicle involved in this incident,” state police Lt. Mark Harris said. “While the camera log shows that the camera started recording when the patrol car’s lights were activated, the camera malfunctioned and did not write the incident to the memory card.”

The incident has left the community of Warner Township in an uproar while the story continues to circulate in local newspapers and on social media. On Wednesday, many of  Sevenski’s supporters protested trooper Artfitch’s actions outside the Antrim County District Court House. Lawyers for Sevenski have stated that they plan on launching a “vigorous defense” when the case is heard in Circuit Court.