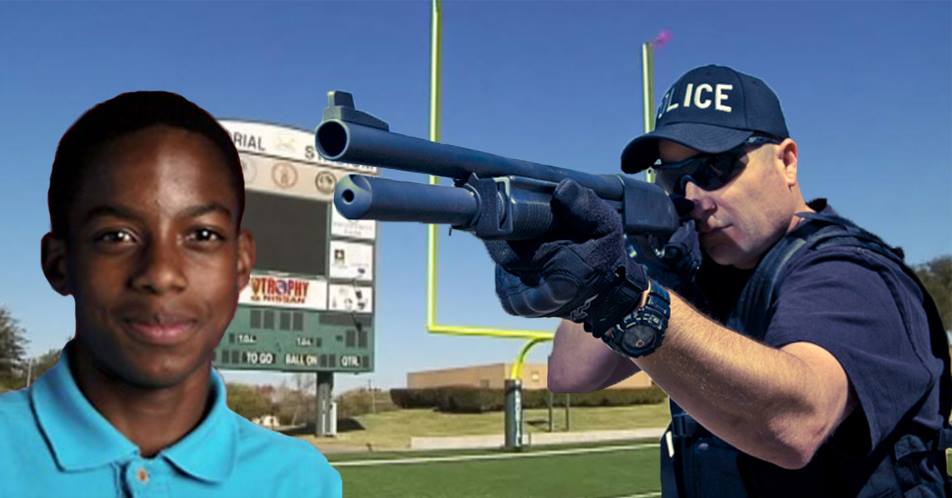 (Police State Daily) A Mesquite High School freshman was killed by a Texas police officer who fired a round into a moving vehicle cops claimed was “driving aggressively” toward them.

According to Balch Springs police chief Jonathan Haber, officers were responding to a report about intoxicated teenagers at around 11 p.m. Saturday in the 12300 block of Baron Drive when a vehicle carrying 15-year-old Jordan Edwards backed down the road toward the cop “in an aggressive manner.”

One officer reportedly fired multiple rounds with his rifle at the vehicle and struck Edwards, who was sitting in the front seat, in the head. He was later pronounced dead at a nearby hospital, Haber said.

At a press conference on Monday, Haber did not identify the officer responsible and was tight lipped about the particulars that led up to the killing. He did say however that the cop has been placed on administrative leave and that no officers were injured during the incident.

Edwards and the other occupants of the vehicle had reportedly left a party over the weekend “where they believed danger was” when the police shooting occurred, said family attorney Lee Merritt.

Merritt also contends that the teens were not armed and did not “drive aggressively” at officers as police claim when Edwards was shot through the passenger’s side window. Merritt is now demanding the release of body-cam footage so that Edwards’ parents can grasp the full picture of what actually transpired.

“As the family struggles to deal with the pointless murder of their child they now have to face false claims of under-age drinking and fabrications about ‘aggressive’ behavior,” Merritt said in a statement.

Edwards attended Mesquite High School where he was said to be a model student athlete with a GPA over 3.5.

“Great kid. Awesome parents. He was not a thug. This shouldn’t [have] happen to him,” said Chris Cano, choking back tears outside the Balch Springs police department on Monday during Haber’s press conference. Cano’s son played football with Edwards. “[Edwards] was well loved,” he added.

Edward’s parents are seeking charges filed against the unidentified officer involved and say they want justice for the unnecessary killing of their son, according to Merritt.

It was a solemn day at Mesquite High on Monday with extra counselors on hand to help students cope with the death of their friend and classmate. Exams were also postponed until Tuesday, a school spokeswoman said.

“Mesquite ISD’s deepest sympathies and prayers are with the family and friends of this young man who tragically lost his life late Saturday evening,” said a statement from the school district. “He was a good student who was very well liked by his teachers, coaches and his fellow students. The entire district — especially the staff and students of Mesquite High School — are mourning this terrible loss.”

UPDATE: Balch Springs police chief Jonathan Haber admitted late Monday that the car full of teens was actually driving away from officers when shots were fired.

According to Haber, body-cam footage shows that the car first backed down the street before it fled the scene in the other direction. That’s when the officer opened fire, Haber said.