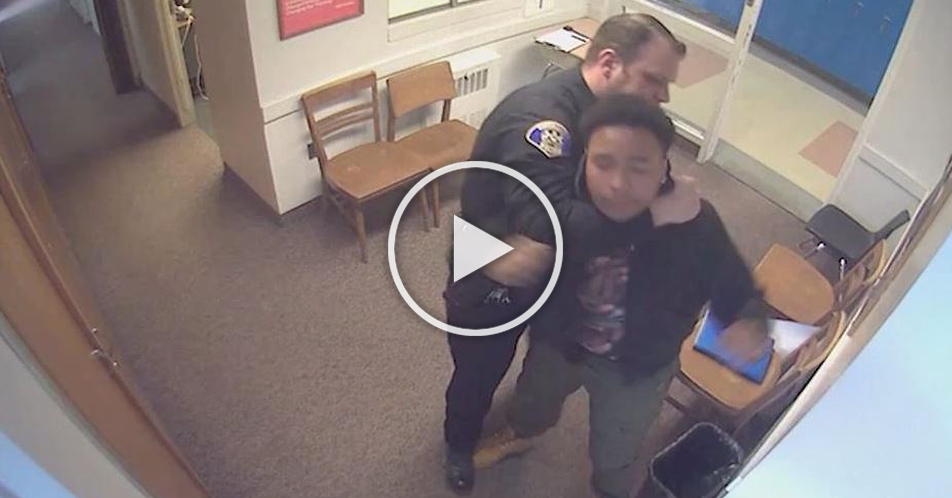 (Police State Daily) Confirming a clear pattern of abuse at Woodland Hills High School in Pittsburgh, a new video shows a nonviolent teen being brutalized by a resource officer.

Released by attorney Todd Hollis, the footage shows the 15-year-old student being placed in a headlock before being body-slammed and repeatedly tased by officer Steve Shaulis on March 3, 2015.

The teen was reportedly asked to leave class and report to the office where he is seen in the footage sitting in a chair appearing to calmly speak with Shaulis. The school cop then aggressively brings the boy up to his feet, places his forearm around his throat and leads him down the hall.

The teen can be seen struggling with Shaulis before he is picked up and slammed onto the ground. Principal Kevin Murray can then be viewed on the footage holding the boy on the ground while Shaulis deploys his taser.

According to Hollis, flashes on the video show that the taser was used three times on the student. At a press conference on Tuesday, Hollis said that “if a picture speaks a thousand words… a video has to speak a million.”

The incident isn’t the first one to be questioned involving resources officers and school administrators at Woodland Hills High School. In November of last year, video surfaced showing Principal Murray harassing, berating and cursing at a 14-year-old student who filmed the exchange the previous April.

As a result of that incident, Murray was placed on administrative leave by Woodland Hills Superintendent Alan Johnson and an investigation was launched. It appears that Murray cannot be trusted to tell the truth regarding violent events at his school however.

Following the most recent episode involving the 15-year-old, Murray’s attorney Phil DiLucente claimed the principal had no knowledge of what occurred until it had already happened. The video released on Tuesday clearly shows that isn’t the case.

Just last month, it also came to light that another 14-year-old had his teeth knocked out by Shaulis at the school, an additional incident in which Murray was present. According to Hollis, Shaulis called the boy a derogatory name and then dragged him into his office where “he was thrown against the wall. . . [and] punched in the back of his head. . . [while] he was placed in a prone position on the ground.” Hollis, who represents two of the three teens, says he plans on filing a lawsuit against the school district, and is demanding that the superintendent, Principal Murray, officer Shaulis and any administrator who was aware of the alleged incidents be fired.

A fourth teen has also come forward with stories of alleged abuse at the school. An attorney for that student, Tim O’Brien, says his client is a 15-year-old girl who claims similar altercations and “fabricated” criminal charges in two incidents in 2015 and 2016. According to O’Brien, the girl and her family are also considering taking legal action.

The Allegheny County District Attorney’s Office says it is aware of the claims made by students and are working with state and federal agencies to determine if any criminal misconduct occurred at the hands of Shaulis or school administrators.

“In the course of the investigative work by the Allegheny County police. . . we are working with other agencies, both state and federal, to determine what if any crimes have been committed and which venue best addresses the issues presented,” an Allegheny County police spokesperson said in a statement. “The investigation is ongoing and, when appropriate, we will comment further.”