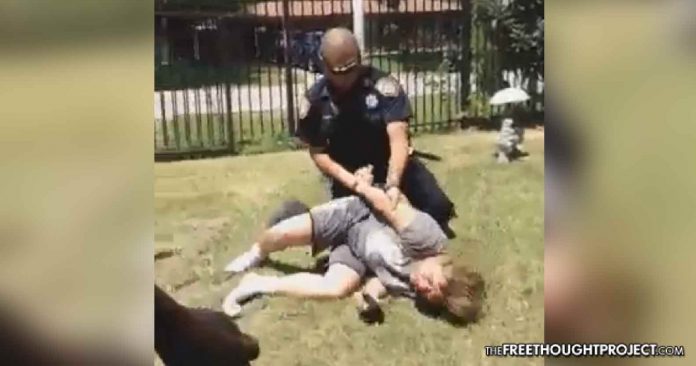 POSTED AT THE FREE THOUGHT PROJECT:

An innocent mother’s assault by a police officer highlights the risk people take when calling 911 for help. Angela Lopez needed the police for help but when they showed up, help was the last thing she got.

The Free Thought Project spoke with Mrs. Lopez, who wants her story told so that others do not share her brutal fate.

On August 16, 2014, Lopez had an altercation with her daughter. So, she called the cops to help her resolve this situation.

“I was involved in a physical incident with my oldest daughter that turned out bad. I was really upset because she had hit me and bit me in the knee. I wanted her and ex-boyfriend out of my home. After they refused to leave, I called 911 to get someone to come out to help me remove or escort them out of my house,” Lopez explained.

As Lopez explains, “He entered into my front door which was open. The first thing I told him was if he could please talk to my daughter because she wouldn’t listen to me. His first reply was ‘Shut up and give me your ID!’ So I turned to my other daughter in the hallway and asked her to get my purse in my room. Then the officer took a step towards me, got in my face and raised his voice loudly, and told me, ‘Did I tell her to give it to me? No! I told you to give it to me!’”

“Look, officer, you don’t have to yell at me. I’m not disrespecting you in any way,” Lopez told Salazar.

But this seemingly made the officer even more aggressive.

“Well, you don’t listen!” He pointed out his finger toward Lopez, saying, “Now step outside and let me talk to your daughter!”

Lopez tells the Free Thought Project that she realized that calling the police may have been a bad idea after this cop began to escalate the situation.

“At that point, I had a bad feeling this would not go good and that I could not trust him to help me resolve this, not with his aggressive attitude. I was upset, shocked and confused about why he was treating me that way, especially when I was the one who called the police for help,” Lopez said. “So at that point, after he told me that, I told him, ‘You no what, if you want to talk to my daughter, you and her can step out and you can talk to her out there. This is my house.’”

Having been told what to do set this officer off. He then demanded her ID once more and when she asked why, he attacked.

In the video, we see Salazar yank Lopez out of her house and slam her down in the front yard.

“He grabbed me by my wrist twisted my arm slightly and yanked me out of my house. When I was on the ground he kept telling me to give him my arm, knowing darn well, I couldn’t because my arm was trapped under my body and he was on top of me. He even bent my arm all the way in half, behind my back applying his pressure against it, hurting my shoulder really bad,” she said.

Salazar’s attack and subsequent ‘stop resisting’ remarks are typical in police takedowns. Salazar demanded Lopez give him her arms, while at the same time making it entirely impossible.

After brutalizing her in front of her children, Salazar then put Lopez in handcuffs and shoved her in the back of his cruiser — with the car turned off.

It was a hot day and Lopez recalls sitting in the back of the cruiser for a half an hour sweating before having an asthma attack.

“I could not breathe because he had all his windows rolled up, and it was very hot that day,” Lopez recalls. “I threw up 5 times because I was feeling so sick cuz I couldn’t breathe. I was left there alone without my asthma meds. About 30 minutes later, he took me to jail and told me he was charging me with Failure to ID.”

After sitting in the jail all day, Lopez was let go with no charges. She’d been assaulted, kidnapped, and caged, for doing nothing wrong.

Naturally, Salazar was never held accountable for the attack and in October, Lopez filed a lawsuit. Lopez is now permanently injured from torn ligaments in her shoulder. All for calling the police.

Mom attacked by cops in front of her children by TheFreeThoughtProject