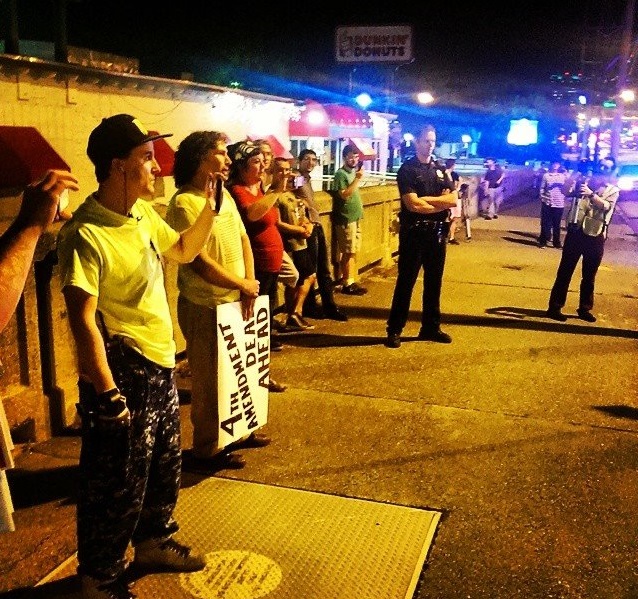 Articles Original Content
June 6, 2017June 6, 2017 Ian Freeman 1717 Views
89
SHARES
FacebookTwitterGoogleRedditTumblr
DiggLinkedinStumbleuponMailPrint
As one of the original copblockers (badge #5), I’ve been in the streets a lot over the years. I’ve helped save people from harassment by the police on countless occasions, informed thousands of young people about their rights, and have been arrested several times.

There’s no doubt that a couple of dedicated copblockers can make an impact out there. I’ve seen that happen. However, have you ever hit the streets with a dozen people on your side?

I’d bet you haven’t. We just don’t have enough people in most places to accomplish numbers like that. Police accountability activism in the streets is a risky place to be, so its hard to find people who are willing to go out, even among vocal supporters.

I have had the pleasure of being out with large groups and let me tell you, it’s a game changer, especially in New Hampshire, where there aren’t a whole lot of police in most towns. Even in its biggest city of over 100,000 people, Manchester, the police DUI checkpoints have basically been shut down by groups of up to a few dozen people. The DUI checkpoint activists come out every time the police do a checkpoint and the activists bring reflective signs, cameras, two-way radios, and set up at strategic locations to alert drivers to the existence of the checkpoint and encourage them to turn away. At a recent such event, there was a relatively small turnout of only about a dozen people and they reported 90% success at getting cars who were going to turn into the checkpoint road to turn away from it instead! There was one arrest at the event, as a couple visiting Keene copblockers ventured away from the group to target the checkpoint directly with their cameras. Activist Christopher Waid was threatened and arrested as he crossed the street into the median. You can check out video of that here. What would have happened if there were a dozen people backing Chris up instead of just one?

As we learned in Keene, NH (the home of Cop Block) back in 2009, large numbers of activists can completely overwhelm the police, even inside their own department. Here’s video of a crowd of people smoking pot in the lobby of the police station and the cops doing nothing about it. (It was a response after the police arrested one of the organizers of mass smoke-outs that were happening in the city common.)

Having good communication and dedicated activists is key. I’ve seen police leave their pullovers much faster than normal once a couple of copblockers show up on-scene. With a large number in the streets, you can affect multiple police stops simultaneously and really help innocent victims of police harassment in a much bigger way. Two-way radios and group messaging apps like Telegram and Riot are excellent ways to coordinate on the ground and in advance.

However, for most of you reading this, having a dozen people out in the streets together is a mere fantasy. The reality is, you’re toiling away alone or with very few allies, and it’s been that way for years. If you could use some backup and you are of a libertarian mindset, you really need to make the move to New Hampshire, the place where both founders of Cop Block, Pete and Ademo have called their home.

New Hampshire has been the destination of a libertarian activist migration now for over a decade, many of whom are Cop Block supporters. If we who support police accountability can concentrate our activism in one state, we can have a much greater impact. We’ve already proven that in New Hampshire, but we still need more help. Numbers are a game-changer. If we can outnumber the police at any given event, the tide will turn in our favor. Are you willing to step up? If so, check out the two current migrations of liberty activists to New Hampshire, the Free State Project and the Shire Society and start planning your move ASAP. Let us know you’re coming and get connected via the NH Copblock group on facebook or the Shire Forum.

Here are 101 reasons you really should make the move to New Hampshire: