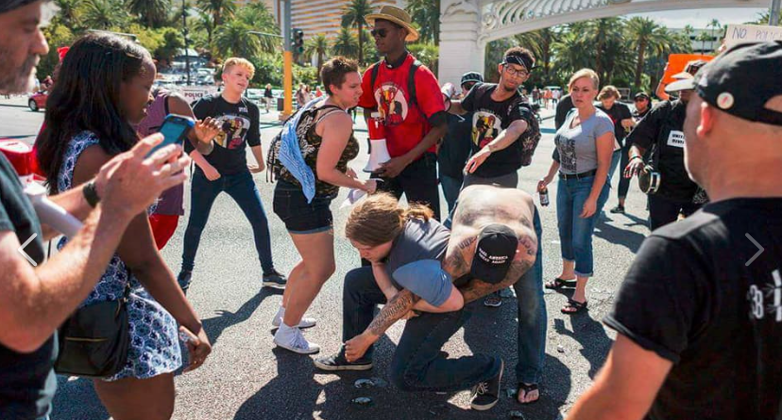 NOTE: this post was originally published at NVCopBlock.org under the title “Tashii Brown Protest: Woman is Attacked by Racist Man With Knife, LVMPD Arrests Those Defending Her.”

On May 28th, during a protest on the Las Vegas Strip over the murder of Tashii Brown by LVMPD Officer Kenneth Lopera at the Venetian (see body camera video of the murder embedded at the bottom of this post), an as yet unidentified man physically attacked a woman participating in the protest. In the process of doing so, he knocked her to the ground and then pulled out a knife. Before he could do anything more, other protesters stepped in, pulling him away and disarming him.

On Sunday, a fight broke out in the intersection in front of the hotel-casino when a passer-by appeared to wrap his arm around protester Rachel Siota’s neck and take her to the ground.

The passer-by, a shirtless man wearing a “Make America Great Again” baseball cap, walked into the street and tried to wave cars through the protest line. Siota said she was taken down when protesters refused to move.

The man started attacking other protesters when they tried to get him away, she said. Several protesters then started punching the man.

This video that was posted to Twitter by Las Vegas Review Journal reporter Blake Agpar shows that intervention by those protesters (it unfortunately doesn’t show the very beginning with the initial assault):

Here’s video of the fight between protesters and a man not involved with the protest in the middle of the Las Vegas Strip. Strong language. pic.twitter.com/zB6lJz0SWR

Another, more detailed, account of the attack was included in a submission to “It’s Going Down!” by one of the people present at the demonstration:

A shirtless, tattooed, very obviously inebriated white man in a Make America Great Again hat entered the crosswalk during our direct action and was immediately hostile and out of line. He assaulted one of our female demonstrators. He placed her in a chokehold and slammed her into the pavement. Another demonstrator who was awaiting heart surgery, was assaulted along with several other members of our demonstration. This man put his hands on not one, not two, but at least three of our female demonstrators. He would not let go of anyone he got his hands on. Alcohol was thrown in our faces and he screamed over and over about how he didn’t believe anyone he assaulted was female.

During the scuffle I noticed that the assailant had a knife. I alerted people about this and there was a collective effort to resolve the situation immediately. The assailant was taken away by the police but we’re unsure as to whether he was ever brought in or charged with anything. He was seen wandering around after the incident, without cuffs, while all of our demonstrators were restrained.

One of our medics was arrested, followed by some organizers. Most of the population of the protest had dispersed, but there was still a smaller group of us by the fountain afterwards resting, hydrating, making phone calls, and doing interviews with the local media. The police also conducted an interview on site. Long after the action was over, another one of our medics was arrested, along with one demonstrator who had just wrapped up an interview. The media had even made a point to question the police as to why they were arresting people so long after the crimes they allegedly committed.

In total, we had twelve demonstrators detained/arrested/cited. Two of which were street medics. Everyone has since been released.

According to the Washington Post the person who attacked us WAS NOT EVEN ARRESTED OR CITED. He was briefly detained and immediately released. But three protesters defending our people were jailed and charged. An additional 8 were cited with misdemeanor violations and released.

According to the LVRJ article quoted above, 15 people in total were detained and eight of those detained were issued citations, then released. In addition to that two of the people detained were arrested for assault, as a result of the fight that the unnamed Trump supporter initiated. Reportedly, one other person was also arrested for having an unspecified weapon (reportedly a retractable baton) on them, that was never used or displayed. All have since been released pending trials.

However, as noted in the ItsGoingDown.org post also quoted above, the racist Trump supporter who assaulted and pulled a knife on a woman was not among those who were arrested. In fact, the Washington Post published a list of the names of those charged and cited, which did not include the person who actually attacked multiple women and brandished a deadly weapon. Instead, those who came to the defense of the main target of his attack were detained and even charged with assault in what was clearly a case of self defense.

Anybody who is familiar with the LVMPD and their history will not be surprised by this obvious show of bias on their part. However, much like the murder of Tashii Brown itself, this is a prime example of where the Brown Shirts at the Las Vegas Metropolitan Police Department stand. The fact they quickly stepped in to protect a racist who had just committed a cowardly attack on women while brandishing a knife and then attempted to punish those who protected his intended victims, is a vivid reminder of who they actually stand with.

It isn’t the people.

Posts Related to What Happened in Vegas