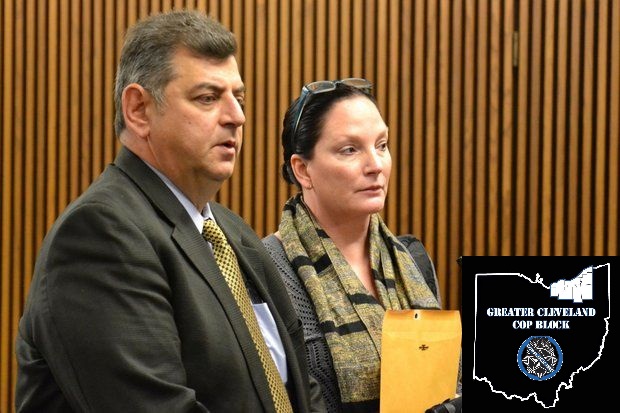 A Cleveland police officer, Valerie Thompson, has pled guilty to a 2016 incident in which she forced a local woman to delete video off her phone.  She was working an off duty shift as a bouncer in a West Park bar with other bouncer friends of hers, Kevin Brenis and Elias Hanna. When her Brenis started a fight with bar patron Matthew Heben, Thompson saw a woman recording the incident. She then ordered the woman to delete the recording. Heben was subsequently arrested for felonious assault, but the video would have showed Heben to be the one who was assaulted.

According to public records obtained by Cleveland.com:

Thompson concealed and ordered the destruction of a “video recording of the felonious assault of Matthew Heben,” the affidavit says. She then filed a false police report of the incident that left out evidence pertinent to the investigation, the affidavit says.

Thompson  struck a last-minute deal with assistant Cuyahoga County prosecutors the morning her trial was set to begin and pleaded guilty to tampering with records and attempted tampering with evidence, low-level felony charges that will likely see her avoid a prison sentence. Typical of police accountability, there is none!

As part of her plea agreement, Thompson agreed to resign from the department and surrender her certificate to be a police officer in Ohio. She will of course, get to keep her pension.

The taxpayers of Ohio will be forced to pay her a salary for the rest of her life. Meanwhile Matthew Heben was forced to plead guilty to disorderly conduct charges. He will not escape accountability like Valerie Thompson has. He will not be paid like she will. There is still no justice in Cleveland.