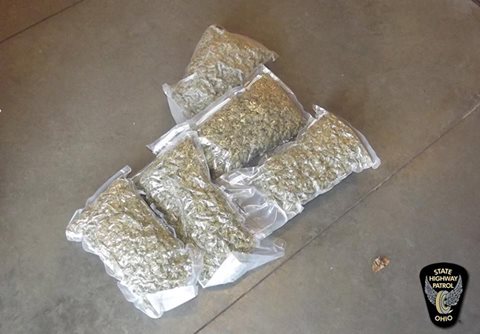 The Ohio state highway patrol is also engaged in the practice of searching cars and arresting drivers and passengers for whatever else they find. On June 2nd they arrested two men for marijuana possession and trafficking on Interstate 75 southbound, near milepost 197 in Wood County. This appears on the highway patrols facebook page:

During interaction with the occupants, troopers detected an odor of raw marijuana. A probable cause search of the vehicle revealed five heat-sealed packages containing marijuana, worth $22,700. Troopers also discovered $4,918 in cash. The driver, Robert J. Milton, 43, of Evansville, Ind., was incarcerated in the Wood County Jail and charged with possession and trafficking in marijuana, both third-degree felonies.

It is accompanied by the following photograph. So in other words the State troopers wish us to believe that they can smell marijuana that is vacuum sealed without the help of a dog. This trooper expects you to believe that he smelled this weed you see pictured here with his own nose. How is that possible?? Isn’t that why they have K-9 units in the first place? I find it hard to believe a man can smell marijuana through a vacuum sealed package don’t you? The implications are that this trooper lied and invented probable cause to search a vechile that otherwise should have only gotten a ticket. Which brings up another point. Isn’t Ohio a medical marijuana state now?

The people of Ohio had an opportunity in 2015 to vote for full legalization that would have allowed people to grow their own medicine in their own homes, but big lobbies convinced the voters that issue 3 would create a monopoly for the out of state big growers. How do you feel now Ohio? The governor of Ohio, John Kasich signed a plan to legalize medical marijuana into law without a vote. He arbitrarily came up with a plan and put it into action after the defeated issue 3 vote, without allowing Ohioans the chance to vote on it. Provisions of this law allow people to bring marijuana in from other states so what are we doing here? Why continue to arrest people for it on our highways?

Recreational use is still illegal in Ohio, but decriminalized. You may posses up to an ounce of marijuana and only be subject to a ticket. But why? Why allow the police the power to invent probable cause in order to arrest people for a plant that is medically legal, and recreationally decriminalized? It’s because it is the biggest money making extortion plan the highway patrol has available to them. Potheads always go to court and always pay their fines!

Do the right thing Ohio. Legalize marijuana across the board and take this disgusting abuse of power away from these highwaymen! Stop letting police get away with breaking one law to enforce another bad law! Remember Ohio, good people disobey bad laws!

Here are some of the comments on the OSP Facebook page regarding these marijuana arrests:

Shane Bracy “Enforcing unjust laws, which have been proven time and time again to be against the will of the people, is tyranny. Just doing your job is no excuse, sorry. Hitler’s generals said the same thing…”

Matt Morbitzer “Although I’m completely for the full legalization of marijuana these officers are doing their duty as by which the law states. Now if we could only get rid of said law these gentlemen can put forth more effort into getting actual harmful drugs and junkies off the streets.”

Matt Bechstein “The hostility shown towards the OHP should be directed to the grand old Ohio legislators that allowed a piece of garbage proposal to legalize pot to be voted on knowing full well that it would be voted down. Maybe some day Ohio will join this century. Till then, it’s still illegal and they did their jobs.”

Jesse Peele “All these comments & not one mention of OSHP posting this at exactly 4:20. Two dummies off the street is not a bad thing. Seriously morons 15lbs… it’s called cruise control. No props to OSHP though. This fell in their lap”

Jason Sebaugh “Great job loser troopers. You took something harmless off streets while the guy with fentanyl and heroin are driving right past you.”