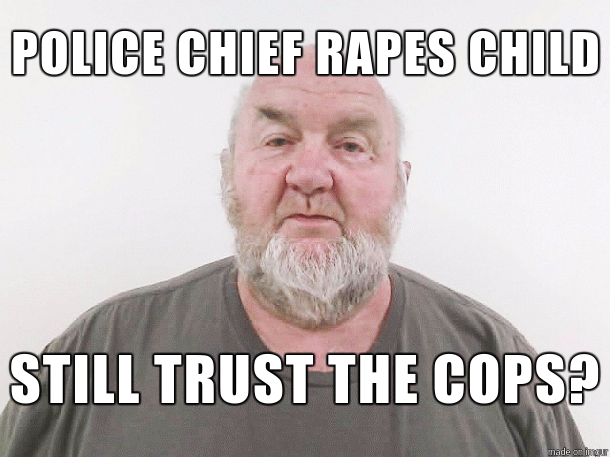 Articles Police Abuse
July 8, 2017 Ian Freeman 1843 Views
82
SHARES
FacebookTwitterGoogleRedditTumblr
DiggLinkedinStumbleuponMailPrint
The reason why the government police can be so corrupt and violent is because they have a monopoly on violence. There’s no competition allowed in the marketplace. Worse, you’re forced to fund the police, even if they are doing things you disagree with, like arresting people for possession of cannabis, teens for alcohol, or committing multiple counts of rape against a child.

Area former police chief Robert K Chambers, Sr, who’d been the head of both the Gilsum and Marlow New Hampshire departments was recently convicted on several counts of aggravated felonious sexual assault and sentenced to decades in prison, according to the Keene Sentinel. Chambers is 65. Here’s video of the harrowing victim impact statement his victim made at Chambers’ sentencing, as published by The Jail Paper Keene, a new court videographer on facebook.

Many people mistakenly believe all Cop Blockers are against the police. The truth is, I’m not against the police. I’m in favor of when police protect people from real crime involving a victim. I have even assisted the police when they were investigating real crimes. However if police are arresting people for victimless crimes, I will oppose that. I’m a police accountability activist, which means holding the cops to their promise of doing good by reporting on the bad ones. The worst cops are those like Chambers, who are clearly people in search of power over others, as this recent despicable example sadly proves.

It’s of course, not the first time that NH’s top cops have been caught up in ugly news, revealing some of them as corrupt, power seekers. Don’t forget the New London, NH chief who allegedly coerced college girls to take nude photos in the police basement when they were arrested for some victimless crime or another. Or how about the Canterbury, NH chief who allegedly used his position of power to engage in sexual acts with a female teen police explorer? There’s the Haverhill, NH chief who resigned after being busted for DUI. Obviously not all chiefs are low-life hypocrites, but you have to wonder how many of them are corrupt. There’s no way to stop a corrupt officer from rising through the ranks of power, since if you withhold taxes in protest, the very same police will come and attack you and your family.

Obviously Chambers is the lowest of the low – a now-convicted child rapist who also has previous murder allegations hanging in his past. However, as long as the state exists, power-seeking psychopaths like Chambers will continue to wield as much as they can, undetected for decades, if ever. Until taxes are made voluntary, there is no way for people to do anything more significant than continue to uncover, publicize, and complain about corruption.

Luckily, there’s an ongoing NH Freedom Migration where liberty-minded, peace-loving people are moving to New Hampshire and working to reduce the government here. Perhaps someday the state’s violent monopoly will be ended and the market will finally be able to provide important services like protection, where competition and the ability to say “no” to a bad company’s product or service will raise quality, service, and lower price. That will result in better protection services, provided by those seeking customer satisfaction rather than power.

If you are libertarian of voluntarist, especially if you’re interested in police accountability, here are 101 Reasons Why Liberty Lives in New Hampshire, and why thousands of people who think like you are migrating here, ASAP.