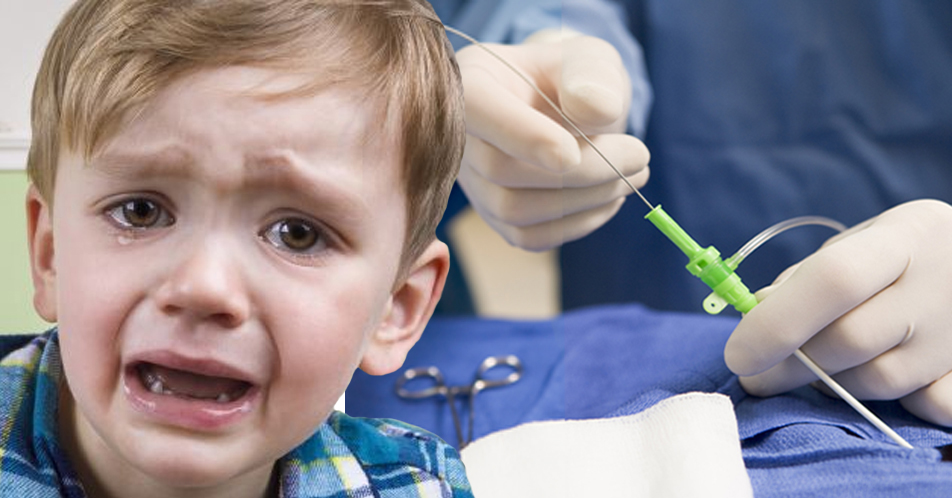 A three-year-old boy was forcibly catheterized on behest of South Dakota Dept. of Social Services employees during a child abuse and neglect investigation after marijuana was found in a woman’s home, a federal lawsuit states.

Catheterization occurs when a tube is inserted into someone’s bladder through their urethra. In other words, medical staff penetrated a three-year-old boy’s penis hole against his will in order to extract urine to fulfill drug war obligations.

The lawsuit was one of two filed on June 29 by the American Civil Liberties Union in regards to South Dakota’s dehumanizing and allegedly illegal forced catheterization practices.

In one incident, officers in Pierre held down Jason Riis and placed a catheterization unit around his genitals following a traffic stop. The lawsuit alleges the intimidation occurred after Riis had already agreed to voluntarily provide a urine sample.

In another incident the lawsuit accuses officers of forcibly catheterizing Cody Holcombe after he agreed to voluntarily provide a urine sample but was “taking too long” having already drank two cups of water.

An additional incident involved Aaron Henning, who was present at a home where marijuana was found by probation agents. Even though no marijuana was found on or near Henning, the lawsuit states he was forcibly catheterized anyway in order to comply with a search warrant for everyone’s urine at the residence.

Another plaintiff named in the suit is Gena Alvarez, a Nebraska woman who has past experiences with childhood abuse. According to the lawsuit, cops thought she was smoking marijuana so “male police officers inspected Alvarez’s genitals during the forcible catheterization, which was unnecessary, humiliating and served no legitimate state interest.”

“The forcible catheterization brought back to her the long-term abuse she suffered as a child,” the lawsuit states. “There was no probable cause that Alvarez had used any drug other than marijuana.”

The last plaintiff named in the suit is Dirk Sparks, who is said to have been forcibly catheterized to search for drugs in his urine by an officer who “had never been trained on the particularity requirement of a search warrant.”

The lawsuit alleges Fourth, Fifth and Fourteenth Amendment violations and is requesting that similar conduct by officers be barred in the future. It is asking for compensatory and punitive damages, reasonable attorneys’ fees and costs, and any further relief deemed just for plaintiffs.

The lawsuit involving the three-year-old boy names multiple defendants including and associated with the South Dakota Dept. of Social Services and Avera St. Mary’s Hospital. It claims that “catheterizing children whom it suspects are victims of child abuse” violates “their rights under the Fourth Amendment, the Fifth Amendment, and the Due Process Clause of the Fourteenth Amendment.”

According to the suit, Kirsten Hunter’s family was investigated by DSS after her boyfriend was arrested for a probation violation stemming from a Feb. 23 visit by Pierre police, who reportedly found marijuana in the home.

As a result, DSS ordered that Hunter take her two children to Avera St. Mary’s Hospital (ASM) in order to produce urine samples for drug testing as part of the investigation. An appointment was then set with the hospital by DSS workers.

“When Ms. Hunter went to ASM for the appointment, Ms. Hunter’s three-year-old son, A.Q., was held down and catheterized because he was not toilet-trained and could not produce a sample in a cup,” the lawsuit states. “DSS did not seek a warrant for this intrusion; instead, it threatened Ms. Hunter with the removal of her children in order to coerce her into agreeing to take her children to ASM to be drug-tested.”

According to the lawsuit, “A.Q. suffered physical and emotional pain during and after he was catheterized. . . [and] screamed during the forcible catheterization and complained of pain and discomfort for several days after.” Additionally, he developed a staph infection in his penis as a result of the catheterization, the lawsuit states.

Incredibly, the forced urine extraction was done to ensure A.Q. was not in an abusive or neglectful home environment. No drugs were found in A.Q.’s urine but the abuse sustained by the boy at the hands of DSS and medical workers will likely be a scaring experience he will not soon forget.

As the other federal lawsuit filed by the ACLU points out, “forced catheterization is painful, humiliating and deeply degrading. . .  [and] creates a risk of psychologically traumatizing a person.”

The lawsuit involving A.Q. is requesting that the defendants’ collective actions be declared a violation of rights guaranteed to children and their parents by 42 U.S.C. § 1983, 42 U.S.C. § 1985, the Fourth, the Fifth, and Fourteenth Amendments to the United States Constitution.

It is seeking compensatory and general damages, in an amount to be proven at trial, against Avera St. Mary’s Hospital and against each of the individual defendants sued in his or her personal capacity, along with attorneys’ fees and costs, and any other relief deemed necessary and proper.