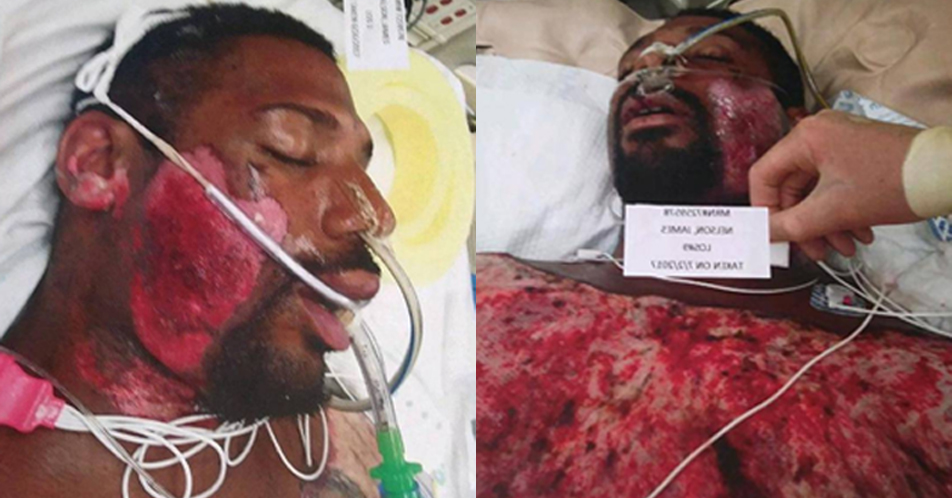 A mentally ill California man was sent to the UC Davis Medical Center Burn Unit with severe third degree burns after being held down on searing hot pavement by Citrus Heights police officers.

According to police, they received 911 calls on June 23 about James Bradford Nelson III, 28, who was reportedly acting erratically at a KFC in the 7000 block of Auburn Boulevard in Citrus Heights. Officers said that after they arrived, Nelson became “combative” and tried to flee.

Security video released as part of a Citrus Heights Police Department press release showed a bare chested Nelson jump the counter at the restaurant before taking a swing at the manager and reaching toward his rear pockets.

In a statement to officers, KFC manager Anthony Easter said Nelson was “pointing his finger and pretending to shoot” people inside the restaurant. Easter also claimed Nelson attempted to grab his wallet out of his pocket.

Nelson then reportedly exited the restaurant to the parking lot outside where he “attempt[ed] to open vehicle doors” and was talking to himself, according to police reports.

Officer Jordan Rinek was the first of eight cops to arrive on the scene. Rinek wrote in his report that he found Nelson walking in the parking lot, “paranoid, very fidgety. . . displaying the objective signs of being under the influence of a controlled substance.”

After Nelson was handcuffed, he reportedly tried to run away before Rinek and another officer took him to the ground and held him down on the asphalt. According to temperature data, the high in Circus Heights that day was 102 degrees Fahrenheit.

Temperature models stipulate that the asphalt in the parking lot may have been as hot as 170 degrees. Human skin receives first degree burns at 118 degrees, second degree burns at 131 degrees and is destroyed at 162 degrees Fahrenheit, according to the National Institute of Standards and Technology.

Nelson was described by one officer on the scene as “yelling” and flailing while being held against the hot pavement. When Nelson was brought upright so that he could be placed in a restraint blanket to keep him from moving his legs, officers noticed his burns.

Nelson was reportedly held against the pavement for around five minutes. According to officers, upon seeing the severe burns, they poured water onto Nelson’s body and called paramedics.

Nelson suffered second and third degree burns on his torso, face and buttocks and was transported to the UC Davis Emergency Room before being transferred to the Burn Intensive Care Unit. Pictures taken at the hospital (pictured above) show the gruesome injuries.

Nelson, who was diagnosed with schizophrenia when he was a teenager, remains in the Burn Unit where he may be required to spend two more weeks receiving treatment. He has already undergone three skin graft surgeries.

“He had a schizophrenic episode, and now he’s fighting for his life. Even a dog doesn’t deserve to be treated like this,” Nelson’s mother, Tarsha Benigno said. “I’ve taken care of him all of his life because of his mental issues. Now, he might be physically disabled, too. I don’t know what we’re going to do.”

Citrus Heights Police have launched an internal review of the incident. They say that upon Nelson’s release from the hospital he will face charges of attempted robbery, being under the influence of a controlled substance and resisting a peace officer.