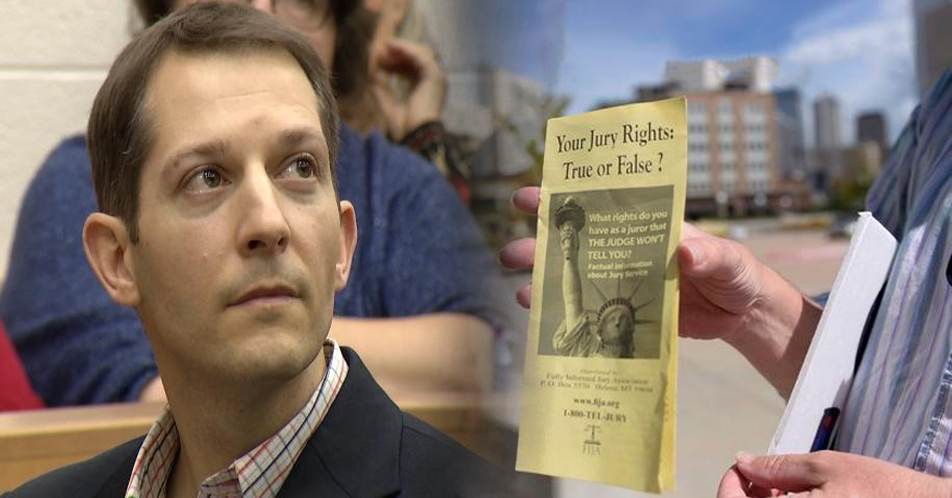 A Michigan man will serve jail time after being charged and convicted in connection with handing out jury nullification fliers in front of the Mecosta County courthouse.

Keith Wood, 41, was charged with felony obstruction of justice and misdemeanor jury tampering after handing out approximately 50 filers from the Fully Informed Jury Association on November 24, 2015.

Facing up to six years in prison, Wood’s bond was set at $150,000. The felony charge was dropped in March however, and a six-person jury found him guilty of jury tampering, which carries a sentence of up to one year in prison, on June 1.

The fliers discussed jurors’ right to vote their conscience in opposition to unjust laws defendants may be charged with. Jury nullification occurs when a jury acquits a defendant, even though they believe them to be guilty of charges under the law.

Supporters maintain that not only do members of a jury have the ability to judge whether or not a defendant broke the law, but also, the law itself. A nullification may occur when jurors disagree with the law a defendant has been charged under, or believe that it should not be applied in a case.

Following Wood’s arrest, he said court personnel came outside of the courthouse three times and asked him to speak with a judge before a deputy threatened to call Big Rapids Police to arrest him. He said he went inside but was told he was not being detained.

“Judge Jaklevic [then] came out of his chambers, he looked at me, he looked down the hall, I didn’t know who he was looking at, and then he looked back towards me and the deputy and he said, ‘Arrest him for jury tampering.’”

Jury nullification has a rich and interesting history. By the 12th century, common law courts in England began using juries for more than just administrative duties and recognized the de facto power of nullification. The power of juries to decide on verdicts was even recognized in the English Magna Carta of 1215.

In the United States, jury nullification has been utilized by jurors since before the American Revolutionary War to fight tyranny. Colonial juries frequently exercised the power in maritime and free speech cases. It became so popular that many British prosecutors gave up even trying to enforce the laws because convictions occurred so rarely.

Jury nullification was also used before the Civil War to acquit runaway slaves being prosecuted under the Fugitive Slave Act. During the prohibition of the early 20th century, juries often nullified alcohol control laws, as often as 60% of the time, which ultimately contributed to the repeal of such laws and the ratification of the Eighteenth Amendment.

The First Amendment implications of Wood’s case cannot be overlooked. During his trial in June he testified in his own defense that he did not ask anyone walking into the courthouse if they were a juror, and maintained he stayed on the sidewalk and never blocked the entrance area as one witness claimed.

Wood, a former pastor, also stated that he did not have any affiliation with the defendant being tried the day he was arrested. That man, Andy Yoder, was accused of violating Michigan Department of Environmental Quality regulations for draining and filling in what had been designated a “wetland” on his own property.

Having received an email about the case, Wood thought the important property rights issue necessitated political activism. Yoder, who is Amish, entered a plea in court that day but the case never went to trial.

During Wood’s trial, Mecosta County Assistant Prosecutor Nathan Hull argued that it was the manner in which Wood handed out the jury nullification fliers that made his actions illegal.

“What made this illegal was specifically how the defendant did it,’’ Hull told jurors. “He did not go to a Walmart. He chose the date of the Yoder trial. The time that jurors would be appearing for the trial. And one of the only two entrances jurors had to walk through.’’

Wood’s defense attorney, David Kallman, said the charge of jury tampering should not have applied in the case because no one entering the courthouse that day had been seated on a jury.

Wood faced up to one year in prison following the misdemeanor jury tampering conviction. On Friday, he was sentenced to eight weekends in jail and six months probation. As part of the probation he will be required to pay fines and complete 120 hours of community service.

In recent rulings courts have prohibited informing juries about their right to nullify. In 1969, a Fourth Circuit decision upheld the concept of nullification, but affirmed the power of the court to refuse to permit jurors from being instructed about the right.

In 1972, the United States Court of Appeals for the District of Columbia Circuit issued a similar ruling. In 1988, a Sixth Circuit Court said, “There is no such thing as valid jury nullification.” In 1997, a Second Circuit Court ruled that jurors can be removed if there is evidence they intend to nullify.

In 2012, New Hampshire passed a state law explicitly allowing juries to be informed about their nullification rights. Two years later however, that law was gutted by the state’s Supreme Court. Since then, libertarian activists have kept applying pressure there.

In March, a similar bill was passed by the state’s General Assembly. That bill, ruled “inexpedient to legislate,” now sits in the Senate Judiciary Committee. The federal Supreme Court has never ruled on the issue of jury nullification.