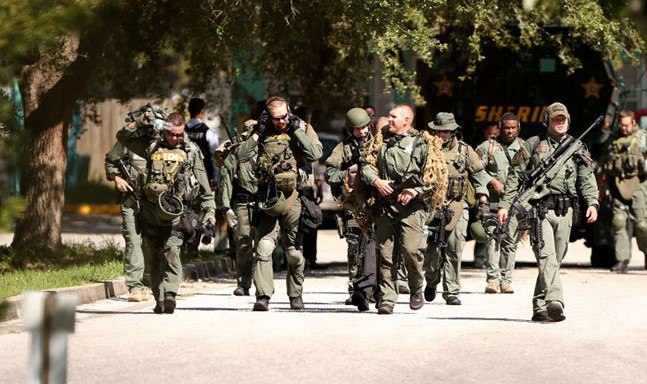 A government watchdog group that posed as fake cops and set up a fake police department were able to acquire $1.2 million worth of military equipment from the U.S. Department of Defense, a report reveals.

According to a 2016 report released by the non-profit government transparency group Open the Books titled The Militarization of Local Police Departments, the equipment includes helicopters, airplanes, mine-resistant vehicles, armored trucks and cars, M16/M14 rifles, bayonets, mine detectors, and many other types of weapons.

The supreme audit institution of the federal government that provides evaluation and investigation services for the U.S. Congress now says they were sent military surplus equipment with zero verification process after setting up a fictitious police department and applying with the Department of Defense.

“They never did any verification, like visit our ‘location,’ and most of it was by email,” said Zina Merritt, the Director of the Government Accountability Office’s Defense Capabilities and Management Team. “It was like getting stuff off of eBay.”

The GAO had access to the full selection of equipment provided by the 1033 program but chose only to bid on nonlethal items. As such, the government watchdog obtained scopes, training rifles, night vision googles and simulated pipe bombs.

According to Wayne McElrath, the Director of GAO’s Forensic Audit and Investigative Services Team, GAO received approximately 100 items worth approximately $1.2 million just one week after applying for the program despite the fake police department’s address tracking back to an empty lot.

“As a private individual we should not have had access to these items,” McElrath said. “Were hoping that our efforts will make it more difficult for these items to end up in the wrong hands. They could potentially end up in the hands of terrorists, criminals or also be sold to other unauthorized individuals.”

In May 2015, President Obama announced reviews of police use of military equipment after signing an executive order that went into effect last year meant to better coordinate federal support for the acquisition of certain federal equipment by state, local, and tribal law enforcement agencies.

The order established an inter-agency Law Enforcement Equipment Working Group with the stated purpose of helping to ensure law enforcement agencies adopt organizational and operational practices and standards that prevent the misuse or abuse of controlled equipment and enforce civil rights requirements resulting from receipt of federal financial assistance.

Since Donald Trump has taken office, the group has reportedly not met however, and questions loom regarding whether or not President Trump will revoke Obama’s executive order entirely.

GAO was ordered by Congress to look into the 1033 program last year. In response to the sting, the Department of Defense has promised to strengthen its verification and approval process for those who qualify to receive equipment.