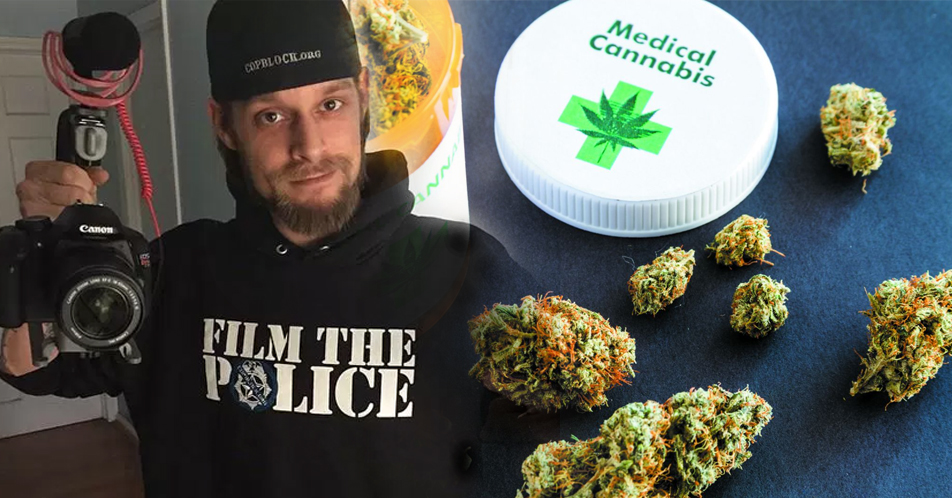 Next week, CopBlock co-founder Ademo Freeman will square off against those wishing to send him to prison for peacefully traveling with medical marijuana in a state that also recognizes legal medicinal use of the plant.

You heard that right. Due to the lack of legal framework surrounding medical use of cannabis in Ohio (even though the state passed medical cannabis in 2016), Ademo faces up to six years in prison and fines of $20,000 when he stands trail on January 11 for possession of his medicine.

As such, Ohio law stipulates that the Board of Pharmacy attempt to negotiate and enter into reciprocity agreements with other medical marijuana states before allowing use of their medicine. Before entering into an agreement with another state, the Board must determine that the state meet certain criteria.

First, the eligibility requirements imposed by the other state in order to obtain a registry identification card have to be substantially comparable to Ohio’s requirements. Second, the other state must also recognize patient or caregiver registration and identification cards issued in Ohio. Ohio has no such agreement with Colorado, the state Ademo obtained his medical cannabis card in, nor any other state for that matter. In fact, the politicians of Ohio have dragged their feet for two years on this issue depriving who knows how many from receiving medical cannabis and killing countless others.

Ademo is no stranger to the criminal justice system. Shortly after founding CopBlock with activist and friend Pete Eyre in 2010 the two were part of a group of activists arrested for recording public officials at the Franklin County, Massachusetts jail.

The following year Ademo was arrested for wiretapping and faced 21 years in prison after video surfaced from West High School in Manchester, New Hampshire showing a student being roughly pushed down onto a cafeteria table by police detective Darren Murphy.

Ademo recorded telephone conversations he had with a Manchester police captain, the West High principal and her assistant in attempt to bring attention to the incident. He represented himself in court and was sentenced to 90 days in jail and three years of probation. Those convictions were later thrown out by the New Hampshire Supreme Court however.

CopBlock is a decentralized organization made up of a diverse group of individuals united by their shared belief that “badges don’t grant extra rights,” CopBlock.org states. In this pursuit CopBlockers routinely draw attention to police brutality and corruption and are known for their controversial and sometimes intense encounters with police. Naturally, shining a light on the domestic enforcement arm of government attracts unwanted attention. In February, Ademo was arrested and charged with possession and trafficking marijuana and possession of hash oil in Warren County, Ohio.

According to WCPO, 24 pounds of marijuana and 26 vials of hash oil were found in Ademo’s car after he was pulled over by Ohio State Troopers for a missing license plate light. He was arraigned on a $75,000 bond.

From behind bars Ademo routinely spoke out about police accountability issues and problems with the criminal justice system. He was released from jail in March following a major bond reduction having refused a plea deal to serve one year in prison.

Ademo has long been a crusader against the drug war, an issue that routinely garners attention on the pages of CopBlock.org. An advocate of self-ownership and an opponent of victimless crime laws, it was in fact a 2004 marijuana conviction that ultimately led Ademo to co-found CopBlock.

Now, almost 14 years later, Ademo continues to stand up for his individual right to decide for himself what to put in his own body. Next Thursday he will stand trial in Warren County having refused another plea offer this week that would have resulted in a 36 month prison sentence suspended for 6 months in jail and three years probation.

In a live Facebook video on Friday Ademo explained why.

Having lived in Colorado for a short while Ademo decided to return to Ohio temporarily after his plans to make a permanent move to the state didn’t work out. Ademo and his spouse (at the time) had decided not to move his partner’s children so far from their biological father (who came back into his young childrens  life) and instead set up a forever home in Michigan (another medical MJ state) after the kids finished school. The only problem was, Ademo never made it back. He was caged by state troopers in the Warren County jail for simply stepping over a line into an occupied territory that seriously needs to clarify its laws regarding the legal use of medicinal cannabis.

“While they say ‘trafficking,’ I had everything I owned in my car,” Ademo said. “There was no drug bust. There were no informants. This wasn’t done at a DUI [checkpoint], I didn’t sell weed to an undercover cop. That’s not my intention. I use weed for medical purposes and I merely had six months worth of medicine with me.”

Ademo has asked people to please call assistant prosecutor Chris Delnicki at the telephone number 513-695-1325 to voice their support. He has also asked friends to send character letters stating that jail isn’t the proper punishment for his so-called “crimes” to Delnicki and/or Judge Robert Peeler at the address: 520 Justice Drive Lebanon, Ohio 45036.

“I don’t believe that my actions deserve 36 months in prison,” Ademo said. “When I go to trial I’m not asking to not be punished. I’m asking not to be punished anymore. I’ve done nearly 50 days in jail. I’ve paid tens of thousands of dollars in legal fees, lost a years worth of time and have basically been on probation for a year. I believe that that’s enough for someone with a medical marijuana card.”

To hear more of Ademo’s thoughts on the case listen below: