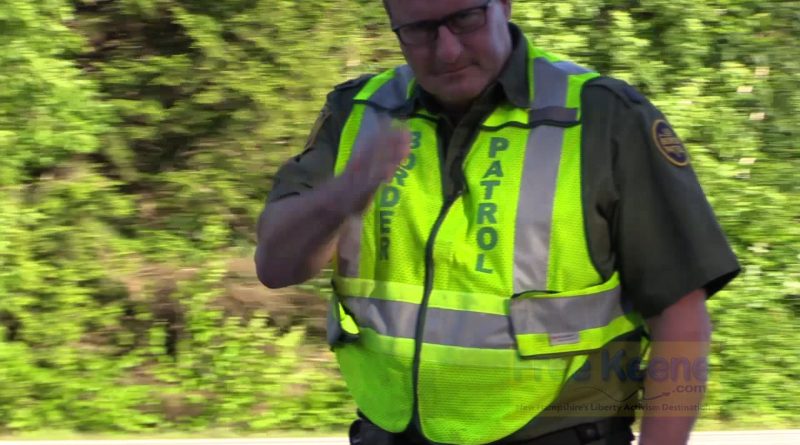 CopBlock Video Videos
June 22, 2018 Ian Freeman 6390 Views
21
SHARES
FacebookTwitterGoogleRedditTumblr
DiggLinkedinStumbleuponMailPrint
On Friday, several Forkfest 2018 attendees drove an hour South of Roger’s Campground to I-93 around Woodstock, NH – the site of the repeating temporary internal Border Patrol immigration checkpoints. Based on activist reports, the checkpoint appeared to have been operating that day from noon until 7pm. As is typical of these checkpoints, they were stopping every car to ask occupants if they are “US Citizens“. They also had a dog they were walking up and down the line of waiting cars.

As it turns out, a car full of people with video cameras wasn’t welcome in their secondary screening area. After one agent orders me to pull into their secondary screening for refusing to answer questions, his commanding officer intervenes before I can even cross over a single lane of traffic, and even apologizes for not wasting more of our time with their invasive screening! In hindsight, I should have told him to apologize to all the cars without camera-toting occupants for wasting everyone’s time with their oppressive police state checkpoint. Here’s the ridiculous video:

No one in the car was planning to answer the agents’ questions, given one has a right to remain silent (that the US Supreme Court has now required be invoked in police encounters). Obedience to tyrants only encourages them. Besides, as someone who believes in liberty, I don’t believe in government borders. Peaceful people should be allowed to enter a free country. Of course, we all know by now the United States is not a free country, and in fact has been dropping on the various international freedom rankings.

Also this weekend, NH Libertarian Party candidate for US Congress NH-2, Justin O’Donnell also traversed the checkpoint while live streaming to facebook. His friend in the passenger seat obediently answered the agent’s inquiry while O’Donnell debated with the agents, ultimately admitting to having been born in Boston, MA. Prior to this, the agent threatened to detain O’Donnell until he answered the question.

The New Hampshire ACLU is requesting anyone else with video of the checkpoint to send it to them. Here’s part of their statement:

Based on videos of the checkpoint recorded by motorists, the way CBP is conducting these checkpoints is deeply disturbing, coercive, and unconstitutional. The CBP told motorists that they were “required” to answer their questions. This is inaccurate. All individuals going through these checkpoints have the right to say absolutely nothing. CBP officials also told individuals that, if they did not answer questions, they would be indefinitely detained until they agreed to answer. This too is not only a legally inaccurate statement, but it flies in the face of the Fourth Amendment and the cases interpreting it. The refusal to answer questions does not create reasonable suspicion or probable cause to prolong a stop at these checkpoints. If a person refuses to comply and CBP cannot promptly determine the person’s immigration status, CBP must immediately release that person. CBP should cease its practice immediately of lying about the law and what is required in order to coerce compliance.

The New Hampshire ACLU does excellent work for freedom and I’m glad to have attended their recent Bill of Rights awards dinner for the sixth year in a row this year. Stay tuned to the Free Keene blog for the latest on this continuing violation of everyone’s right to travel unmolested.