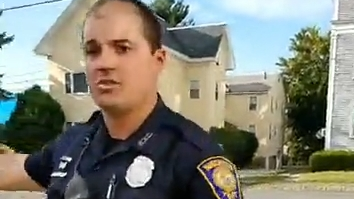 Originally streamed to his social media profile live, Jeremy Kauffman of LBRY.io has been arrested for “Disorderly Conduct” by a Manchester police officer for simply trying to leave his home. The Manchester police state descended on Kauffman’s neighborhood to conduct a homicide investigation in a home at 332 Hanover St., which is apparently near where Kauffman lives. Apparently this included preventing all the neighbors from simply leaving their own properties, a lot like being locked down in a prison by the guards.

Kauffman, a respected software engineer and entrepreneur currently CEO and founder of the decentralized blockchain-based media protocol called LBRY.io recorded the threats and eventual attack by Manchester Police’s patrolman Ryan Olsen on his smartphone. In the approx two minute video, Kauffman is in his driveway and explains to the viewer that he is being kept in his property against his will by the arbitrary detention by MPD. He is not told he’s a suspect in the homicide investigation but is being prevented from leaving to pick up his son.

When he merely walks down his driveway to investigate what is happening near his own home, Kauffman is threatened by officer Olsen who tells him to “go back that way” and when Kauffman asks on what law he’s basing his orders, Olsen says “I’m not gonna tell you again.” When pressed to cite the statute, Olsen pulls out the old police catch-all, “Disorderly Conduct“. Seconds later, Olsen leaves his post across the street, shouting at Kauffman, then manhandles him after telling him repeatedly to “walk back please”. Please? Is this a request or an order?

Olsen arrests Kauffman, charging him with a “Class A” misdemeanor version of “Disorderly Conduct”, which means Kauffman will be facing down up to a year in jail for his heroic non-cooperation with the oppressive Manchester police state. He was released on PR bail pending arraignment in Manchester District Court.

Despite the awful arrest by the terrible Manchester cops – the worst gang in the state – it was refreshing to see some courageous activist video by a Manchester area activist. Kudos to Jeremy for doing a great job standing up for his freedom to travel and proving that when the police state comes down, we’re all just in a big open air general population prison cell. If only we had more activists like him. May his example inspire others to stand up to the police state. Freedom was never won by begging.

Related news: Keene Cop Block has just released our new updated-for-2018 know-your-rights flyer! It’s a simple rundown of individual rights when dealing with the police. It is intended for distribution across New Hampshire, but may also be useful to other areas. It’s informative and keeps-it-simple. 2018 Edition: Front Side / Back Side. I’ve handed out several hundred of these in just the last two weeks around Keene State College and the students really appreciate the information.

Stay tuned here to Free Keene for developments in this case.