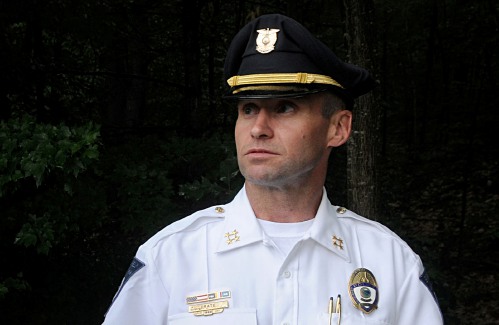 Articles CopBlock Submission
October 7, 2018October 7, 2018 Ian Freeman 8386 Views
58
SHARES
FacebookTwitterGoogleRedditTumblr
DiggLinkedinStumbleuponMailPrint
Enfield police chief Richard Crate, until recently was the longtime president of the New Hampshire Association of Chiefs of Police. He was a regular figure at state house hearings to decriminalize medical and recreational cannabis. Crate publicly opposed those proposals every step of the way – on behalf of police chiefs across New Hampshire. Here’s some of his testimony on cannabis decrim where he predicted a “wave of devastation”. Needless to say, now a full year since decrim – said devastation hasn’t occurred.

Now it looks like Crate should have take up the habit of consuming cannabis. Maybe a joint at the end of his work day would have helped him calm down and deal with his anger issues that appear to have led him to attacking his own son. Crate resigned earlier this year to avoid prosecution by the state’s attorney general’s office, agreeing that he’ll undergo counseling, apologize to his son, and not seek recertification as a police officer, according to the Union Leader.

Don’t think for a moment that Crate is unusual. In fact, he’s not the first police chief to be embroiled in corruption and controversy. Just last year a police chief from Cheshire county was convicted of rape of an actual child (not a teenager). Don’t forget the New London, NH chief who allegedly coerced college girls to take nude photos in the police basement when they were arrested for some victimless crime or another. Or how about the Canterbury, NH chief who allegedly used his position of power to engage in sexual acts with a female teen police explorer? There’s the Haverhill, NH chief who resigned after being busted for DUI. The list just keeps getting longer and longer – does anyone actually still trust these guys?

Of course, if I were to try to catalog the known corruption news regarding the rank-and-file officers, it would be a much more difficult task. Here’s one of the more recent stories involving two now-fired Manchester detectives, Darren Murphy and Aaron Brown, that allegedly used their badges to coerce a woman into sex in order to avoid criminal charges. According to witnesses, the forced sex allegations are just the tip of the iceberg with those guys.

Given the corruption is endless with people in power, how do we stop or reduce it? The answer is that taxes need to be voluntary. If police are not guaranteed a budget every year regardless of the satisfaction of the people they allegedly “serve”, we should not be surprised when they behave poorly. If people were free to stop funding the police, then they’d have to shape up and become more accountable to the people who pay their paychecks. If you could say “no” to their “service”, maybe they’d start being more service oriented and focus on catching real violent criminals instead of college kids who just want to have a good time. Crazy, right?

Hmm, I wonder if because he resigned to avoid prosecution rather than being charged and fired, is Crate still eligible for that sweet police pension?