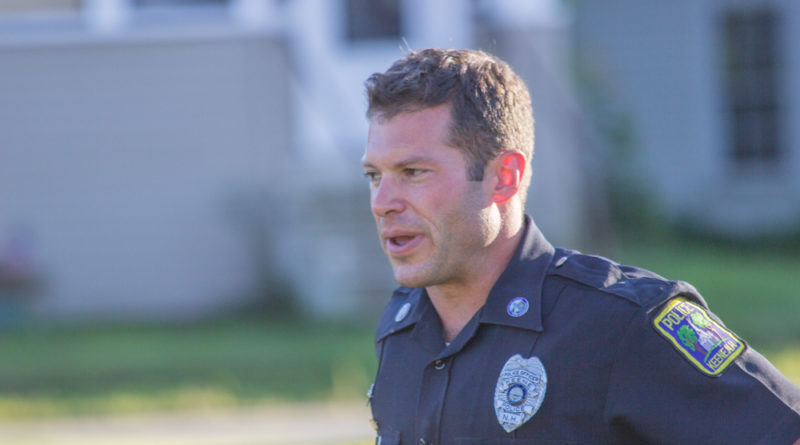 Over the last several days the video and story about Keene High’s “school resource officer” Joshua English attacking and tackling a student for allegedly vaping in the school’s bathroom, has gone viral. However, there’s more to the story than cop-attacks-teen, though this incident alone is bad enough. In case you haven’t heard about this incident, according to other students the young man who was viciously attacked by English was vaping in the bathroom and English confronted him. The student heroically refused to identify himself to the armed, intimidating, uniformed man and walked out of the bathroom. Moments later, English bursted out of the bathroom and tackled the peaceful student, subduing him with a shocking level of force.

Thankfully, another brave student pulled out their phone upon hearing a commotion from inside the bathroom and captured the entire tackling on video:

Understandably many are outraged at the officer’s use of force over a simple vaping incident, but that’s not really what caused English to fly into a violent rage. The young victim’s real crime was disobedience. The youth had the gall to act as though he were a free man, walking away from a threatening, potentially violent anti-nicotine nuisance and attempting to go about his day. English has his “authority” to worry about and can’t possibly be seen by others as someone who one could just walk away from without consequence, so he used violence to dominate the young man in front of a crowd of people.

Keene Police have been making headlines nationwide for proclaiming that English was fully within police guidelines for his use of force against the “subject” – yes, that’s actually how they refer to the rest of us non-gang members. Keene police chief Steve Russo exonerated English in a recent release, saying his agent had not violated any department guidelines or state statutes, but Russo said further that English was worried the young man was a potential trespasser, claiming to the Union Leader, “At that point, he didn’t even know he was a student”.

Perhaps English needs to have his memory tested. While it would certainly be hard to remember previously seeing one random male in a school with over one thousand students, how could English forget that he’d written the same young man a ticket for “possessing tobacco products” two weeks prior? The student’s father showed the proof of this claim to WHDH-TV in Boston.

While Keene Police are trying to make English look like a hero protecting the school from a potential intruder, the reality is much different. In KPD’s official release, they claim the Keene Police and the school district are, “committed to maintaining the safety and security of the students…which may regrettably include when necessary, the use of force to secure that safety.” There were no allegations the young victim was doing anything violent. He was allegedly vaping in the bathroom. No one was threatened by the young man. The only dangerous, violent threat in Keene High School that day was Keene Police’s Joshua English. Who is he?

Don’t expect the mainstream media to do a modicum of digging about English. Otherwise you might have already discovered English shot a man to death in Keene back in 2010. Free Keene blogger and former police officer Brad Jardis covered the story here when English was found to be within the state’s use-of-force guidelines in the shooting incident. In that case, the man who was shot by English was holding a knife to a woman’s throat, so our blogger Jardis agreed with the shooting as necessary. However, is it really the best decision to assign one of the only officers at KPD who has violently taken another human being’s life the duty of being the high school’s cop?

That’s not all you need to know about English’s history in Keene. About a decade back, Keene liberty activists regularly went to karaoke night at a now-closed bar called Gino’s in north Keene. One night, a then-angry and likely drunk man named Dan French decided to attack liberty activist Rich Paul. While the two men were separated after French’s initial attack, someone in the bar called the police. There was no ongoing fight, but Keene Police officer Joshua English arrived on the scene brandishing an AR-15! Is it department policy for police to show up to respond to a simple assault and battery with a military assault rifle when the multiple officers on-scene all had sidearms? As an aside, French may have cooled down his hostility over the last decade, perhaps partially because the night of his attack, Rich Paul refused to identify French to the police, de-escalating the situation as he did not want to retaliate against French.

Also, if my memory is correct, English was formerly in the military. I was unable to verify this, however. KPD’s officer Steven Tenney could not recall whether English was former military when I spoke with Tenney by phone this afternoon. One local claims English was U.S. Army Special Forces.

English isn’t the real problem, of course. Unless he’s actually a psychopath, English probably wanted to help stop bad guys and real violent criminals when he signed up to join the police. Then he got assigned as vape patrol at the high school and is now “just doing his job”. His job is the problem. Nicotine addiction is a difficult thing, but like any drug addiction, it’s a personal struggle for the individual to overcome. Using the state’s violence isn’t helping end addiction – the state makes everything worse. Despite the failure of alcohol prohibition, cannabis, and other ongoing drug prohibitions, people still have not learned their lesson. Prohibition does not work. It never has, and never will. It doesn’t matter how many peaceful vapers are attacked physically by cops, or how many street cigarette dealers are choked to death, nicotine use will continue and police will continue to whittle away their once-positive image by their ridiculous violent enforcement.

English, Russo, and the rest of KPD should grow a conscience and realize that it’s wrong to threaten and harm their peaceful neighbors over their choice of chemicals or any other peaceful, consensual act. There’s even an organization of police and former law enforcers who have come to their senses and are actually sorry for what they’ve done. I recommend any officer who really cares about right and wrong look into Law Enforcement Action Partnership aka LEAP. They used to be called Law Enforcement Against Prohibition and I’ve written a lot about their good work in New Hampshire over the years. LEAP rebranded when they expanded their issues to include other sensible reforms to policing, like being anti-militarization.

Last year, the city gang in Keene passed a ridiculous ordinance prohibiting the possession of nicotine products by anyone under 21 years old and also banning sale of those products to under-21s. As we libertarians predicted at the time, despite the woman who proposed the ordinance not wanting to prohibit possession, the police would be targeting young people for harassment. I even confronted the police chief over this at the hearing where a city committee voted to approve the nicotine prohibition. I asked Russo if simply looking young was “reasonable articulable suspicion” for the police to demand identification from a young person with a vaporizer or cigarette. He admitted he believed it was, while simultaneously claiming they wouldn’t be stopping people in the streets – an obvious lie. That’s exactly what police can and will do. That is precisely what has been happening to countless under-18 Keene youth for years. Police would regularly harass, ticket, and arrest teens for nicotine use and now they can harass even more young people – any of them who they believe to be under 21.

Is a violent takedown of a vape-using young person what the prohibitionists imagined would happen when they passed their precious ordinance last year? Those of us who understand the consequences of prohibition saw this coming. Stop the madness and leave peaceful drug users alone.

The student victim in this case has been identified to me and I’ll be reaching out directly to him for comment. Stay tuned here to Free Keene for any updates.