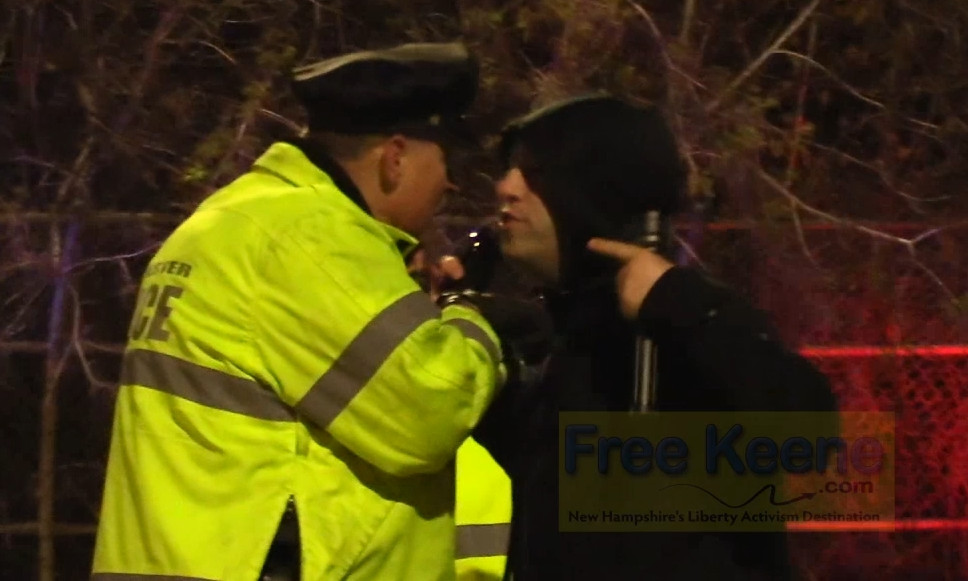 National talk show host, Linux entrepreneur, and Cop Block activist Christopher Waid knew there was a chance he could be arrested for holding the police accountable at a DUI checkpoint in Manchester, but he probably didn’t expect it to be as ridiculous as it was. Moments after he and I had arrived on the scene in April of 2017, Waid walked across one half of Bridge St in order to reach the median to get a closer shot with his video camera. Immediately, Manchester’s own badge #1, Robert Harrington charged over and yelled at Waid, “Get over on the sidewalk where you belong, NOW!”

Harrington then got up in Waid’s face and demanded ID to which Waid declined, correctly stating he has no obligation to provide the angry cop with ID. Harrington then arrested Waid, and charged him with the police’s favorite catch-all of “disorderly conduct”. I caught the entire thing on video, which you can see here. The “disorderly conduct” charge was a “Class A”, which carries up to a year of jail time. Later in the mail, the police sent an additional “violation” for crossing the street outside of a crosswalk.

Now, two years later, the people calling themselves the “City of Manchester” have cut a check to Waid for $15,000 of taxpayers’ money for Harrington’s obviously illegal arrest. For the first time since his arrest, the video from Chris’ camera that was confiscated is now available for you to see. I’ve augmented it with a little of my camera’s view for perspective:

After hiring attorney Seth Hipple, both charges against Waid were dropped – further proof the police knew they had no case and the charges were brought as an excuse to harass a police accountability activist and get him away from the DUI checkpoint on the night in question. Waid, through attorney Hipple, sent the City of Manchester a letter with his intention to file a lawsuit against them and Harrington in Federal court. In the letter, Hipple included his proposed lawsuit where he cited federal code title 42 section 1983, deprivation of rights.

In the 16-page potential suit, Hipple points out that officer Harrington told multiple lies in his *sworn affidavit*:

Hipple correctly argues in the potential suit that Harrington, through the use of intimidation tactics and arrest, violated Waid’s 1st amendment right to be the free press and record government police as well as Waid’s right to be free from unlawful arrest and battery.

Given the costs to litigate this obvious deprivation of rights case, the city cut a $15,000 check to Waid to settle the matter and avoid having to lose in court. It only took two years, but Waid was completely vindicated and took home most of the $15,000 after attorney’s fees. Sadly, it was Manchester taxpayers who are on the hook for the awful police behavior that continues in that area. No officer is held directly accountable for their own actions. Harrington’s pay won’t be docked.

In fact, the settlement agreement that Waid signed with the city gang specifically says the city people admit no liability, culpability, or wrongdoing and that. “the purpose of this agreement is to buy peace”. The reality is the purpose of the agreement is so the city could avoid going to a full trial where they most certainly would have been found liable and culpable of wrongdoing and would then have to pay a lot more in damages and attorney’s fees. It’s also laughable that now the city gang is concerned with peace when they were the ones harassing peaceful drivers and news media at the DUI checkpoint and continue to arrest peaceful people across the city.

In an exclusive interview with Free Keene, Waid said, “While in some respects this entire case has been a vindication of my rights and actions there is a long way to go in fixing the abusive nature of the state. Sadly even where there is no immunity from police misconduct, as was the case here, there is no real consequence for the officers involved. The police will continue to get away with lying, manipulation, and even rape in some cases with utter impunity. Fortunately while there is no hope outside of New Hampshire there is inside thanks to the freedom migration movement. In time we will overcome an apathetic public and corrupt system.”

Hopefully Manchester cops will keep their hands off the media in the future, but only time will tell. When asked what he planned to do with the money, Waid said he intended to spend some of it on cryptocurrency like bitcoin and the rest against further oppression of free people.