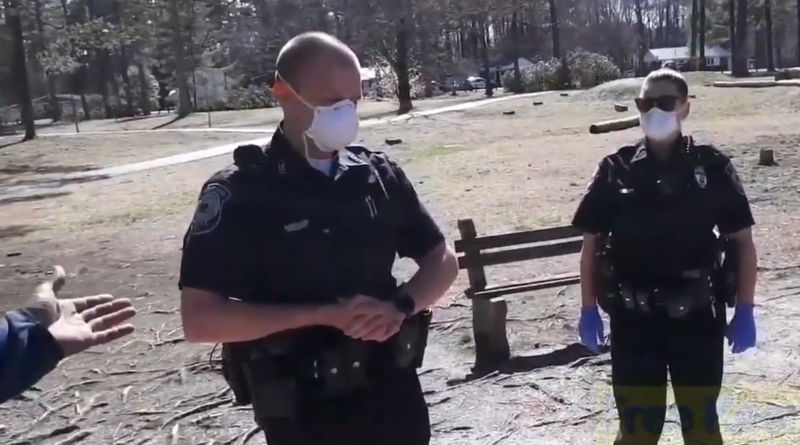 Concord police have ignored groups of protestors at the state house but are more than happy to target a small group of parents at a local playground, when called to scene by a local cowardly snitch. Thankfully, this is New Hampshire and the parents, as yet unidentified in this video originally posted to social media, give the police hell in response! If only more people pushed back like this against government gangsters.

The parents rightfully call the police “NAZIs” and “robots” and get the costumed people to admit that someone had called and snitched on the families for being at the playground. As you might expect, the cops lie to the parents, claiming they have to investigate if called. However, that’s not true as police have discretion and can choose to do nothing. Claiming they are obligated to investigate is a common lie by police to justify harming peaceful people. At the end of the amazing video, the male cop tries to propagandize the parents about COVID-19 and one lady starts coughing – the cops then finally leave – it’s hilarious!

Kudos to these parents for calling out the police and recording video of their thuggish behavior. Thank goodness some people are standing up for freedom here in New Hampshire. Those of us who don’t want to live in fear – as the state and mainstream media are demanding – need to let our voices be heard. I don’t want to live in an insane medical authoritarian nightmare state, what about you?

If you are sick of this shit and want more freedom, come to the state house this Saturday from noon to 2pm in Concord and join the next freedom-to-assemble rally. See you there!