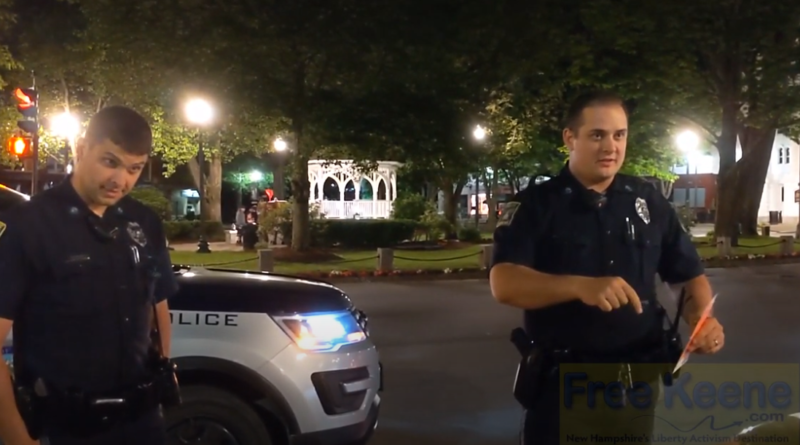 For a dozen weeks, Keene police have ignored the weekly “Nightcap” events that have happened in Central Square, Fridays starting at 11:59pm. I had no reason to continue writing about the events here because they were a success – peaceful people having a quiet party in the Common, unmolested by state aggression.

Until this weekend, when the Keene police attacked in the form of ticketing everyone’s car parked around Central Square. This, while nationwide protests are calling for the defunding or outright abolition of police. In fact, just a dozen or so hours after the police targeted and littered their threats on the cars around the Square, it was filled on Saturday afternoon with hundreds of people protesting the police. Though Keene police’s chief showed up with a sign at the previous Keene Black Lives Matter event and pretended to care, it’s clearly business-as-usual for their agents on the street.

While the nationwide protests are rightfully focusing on the most egregious police abuses like the murder-by-cop or rape-by-cop, a major reason why any goodwill the cops might have had has been whittled away over decades, is their constant harassment and targeting of peaceful people for non-violent, victimless “crimes”. That’s exactly what they did on Friday night, when in search of revenue and obedience, officers Tim Richmond and new guy Jake Laporte showed up at our peaceful party.

When I noticed they had stopped in the street in front of a parked car, I walked over to see what was going on and Jake said something about enforcing a night time parking ordinance. I was not recording the scene just yet and I told him that he could go away and go find something else to do. He made a comment about just doing his job and got back into his police crusier where Tim was in the passenger seat. At that point, though there was still some hope he’d do the right thing and leave, I readied my phone to record video of the scene. Sadly he and Tim got out and began littering on the parked cars around the square.

Later the uniformed monopolists on violence claim they were ordered to enforce some “night time parking” city ordinance that allegedly prohibits parking from 2-6am in the “business district”, which they claimed was Main Street and Central Square. Then, on their last stop around the Square, Leigh, who was visiting from Manchester had gotten into his van right before they rolled up behind him. Because he didn’t leave quick enough, despite being in the process of leaving, the officers pulled up to block him from leaving at all and issued their final $15 ticket before leaving the area. Here’s the video:

Stay tuned to Free Keene to see what we do with the multiple tickets issued.