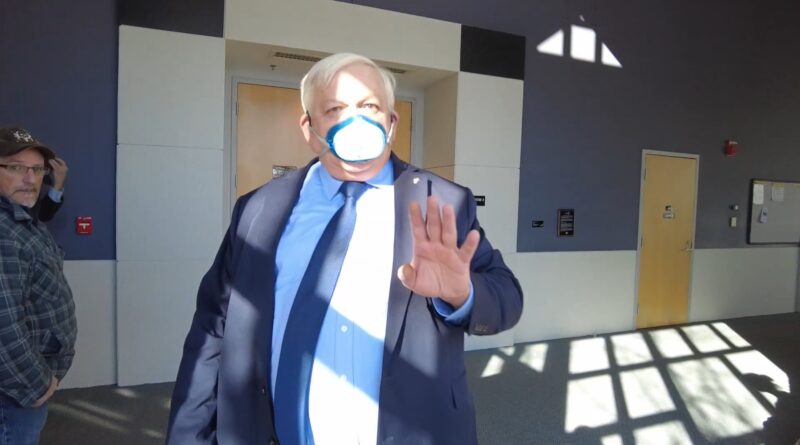 In October of 2021, nine peaceful people were arrested at a well-attended New Hampshire executive council meeting. It started when armed state goons approached activists Frank “Footloose” Staples and Terese Grinnell and requested they to follow them to a partitioned area in the back of the room. Once out of sight of the packed audience, the thugs arrested Footloose and Terese, causing them to verbally announce what was happening. Prior to being asked to walk out, the two were sitting in the audience quietly, so they are still unsure regarding why they were arrested in the first place, as they didn’t make any noise prior to the arrest. So far, the court process has yet to clarify the situation.

Seven other people were also arrested for speaking out during the arrests of Footloose and Terese. The “New Hampshire Nine” had a court hearing on Friday to deal with some pending motions and unlike the rest of the Nine, Footloose is representing himself in the case. If you’ve seen his other videos, you know that means it won’t be dull. Here’s a video with highlights from his visit, including he and other activists bravely refusing to stop recording when threatened by a masked court goon. You can see the full uncut series of videos he recorded at Concord district court on his Odysee.

It’s also worth noting that there is an unconstitutional “Supreme Court” of NH order in place prohibiting recording in all parts of state courthouses except the courtrooms themselves. Those restrictions were put in place because of Keene activists recording over a decade ago and haven’t been meaningfully challenged ever since. Kudos to New Hampshire native Footloose for standing up for the right to record and the right to transparency. It was nice to see him back down the armed goon AND he did it while on bail conditions for his previous ridiculous victimless arrests.

Stay tuned to Free Keene for the latest on his saga.