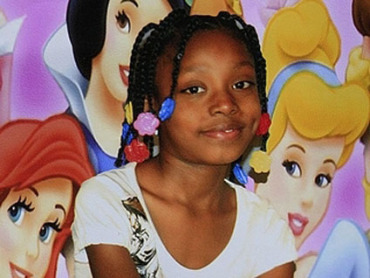 In one of the most disturbing police-related stories I’ve read about in a long time, a member of a SWAT team gunned down a seven year-old girl named Aiyana Jones in the early hours of the morning as she slept on a couch with her grandmother. The police were conducting a raid on the Detroit apartment she lived in to serve an arrest warrant for a murder suspect.

According to the initial statement by the police, Aiyana was killed when an officer’s firearm just “accidentally went off” while he was involved in a “tussle” with the child’s grandmother, Mertilla Jones. The “tussle” between Jones and the armed intruder was later amended to “some sort of contact.” Jones denies that any sort of contact occurred (Jim Schaeffer, “Hunt for suspect’s Tahoe led to Aiyana’s doorstep, police sources say,” Detroit Free Press).

I suspect that if any “contact” was initiated by Jones, her actions were at least partially motivated by the terror she must have experienced when her sleep was disturbed by the flashbang grenade lobbed through her front window—a grenade which allegedly landed close enough to young Aiyana to burn her—and the group of heavily-armed men that charged into her home uninvited and without warning.

Unfortunately, the ultra-violent incompetents charged into the wrong residence. The man they were attempting to arrest lived in a duplex. They picked the wrong apartment.

Unlike the murder suspect the police were looking for, the officer responsible has not been arrested, charged with a crime, or jailed. The police have assured us, however, that the he has been properly rewarded for his homicidal deed with a paid vacation (George Hunter, Doug Guthrie and Valerie Olander, “Detroit-police-fatally-shoot-7-year-old-girl in house search,” The Detroit News).

Apparently, the officer who fired the shot was Joe Weekley, a frequent guest on reality TV shows about police. Weekley’s team is currently being sued over a 2009 raid in which they allegedly killed house pets and aimed guns at children including an infant (George Hunter, “Cop in Aiyana shooting helped needy kids, sued for earlier raid,” The Detroit News). As it turns out, the police were filming one of  these reality TV shows during the raid.  This means that the raid was filmed and, therefore, that there is some amount of video evidence depicting what happened.

Actually, there may be two videos. Although both pieces of footage have yet to be released to the public, Geoffrey Fieger, an attorney representing Aiyana’s family in two lawsuits, claims to have been given access to the second piece of video. According to a statement he made, the police are covering up what really happened. The video, he says, clearly depicts an officer firing his gun into the home from the porch before any officers enter. He also claims that the police were told about the presence of children by a resident before conducting the raid.

Below is Fieger’s complete statement:

It’s not entirely clear who is telling the truth or why neither of the videos has been released, but I don’t understand why the attorney would risk his reputation lying about the recording. Even if we are to believe the police, it’s clear that this was a senseless and completely avoidable tragedy.

In a story about the incident, ABC discussed the issue of camera crews accompanying police on raids with Robert Thompson of Syracuse University. I was rather surprised to find this sentence in the middle of the piece:

The issue of photographers influencing soldiers’ actions goes back as far as World War I, Thompson says, but free speech has usually prevailed over objections to documentarians traveling with soliders. [Tahman Bradley, “Should Detroit Police Have Had Cameras Rolling When Girl was Shot?,” ABC News]

I was surprised because the article is not about soldiers—it’s about cops. Soldiers are not mentioned prior to or after this passage. It has no context. It’s completely out of place.

If you’ve ever seen the Detroit SWAT team (or any other SWAT team, for that matter) in action, then it probably doesn’t seem all that out of place. Sure, SWAT teams aren’t legally military organizations, but that’s where the differences stop. The officers on the Detroit SWAT team possess many of the same types of weapons, training, and—evidently—the same reckless disregard for human life as American soldiers.

Some commentators, like Grigg and Thompson, have made a connection between the reality TV show the cops were filming and the actions they chose, arguing that the reckless tactics used by the police were probably part of an overzealous attempt to look macho for the cameras. I suspect they are right. A desire to impress the audience coupled with the soldier mindset got the better of these cops; they were living in a testosterone and adrenaline powered fantasy land and it cost a young girl her life.

I plan to follow the story of this family’s lawsuits very closely. And I hope they win every penny they can possibly get. I’m sure they’ll have an uphill battle considering Joe Weekley was not a mere civilian like you or me, but one of Detroit’s finest soldiers in the Holy War on Crime.