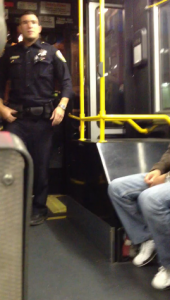 A friend of mine witnessed this last night while riding the bus in San Francisco. He is a lawyer and a journalist. In his own words, this is what he saw. -Jacob Crawford

This evening I was on the bus with a companion—who is also a lawyer—when our bus driver decided that young teenagers don’t have free speech rights. Ultimately it ended up being just a dumb story, but Supreme Court cases have arisen from facts similar to these.

We were sitting on the bus with about ten people. There were two teenage girls and a boy in the back. They were young. They were black. They sounded working-class. One of the girls—our feminist heroine—is telling the other that someone called her a bitch, and that she doesn’t stand for anyone calling her that.

The kids weren’t yelling. Their tone was conversational. Nothing else was going on.

All of a sudden, while at a stop, the bus driver starts shouting at the kids. She asks how long they plan to be on her bus, noting that they have to get off immediately if they continue using “profane language.” The kids, flabbergasted, tell her that it’s a public bus and that they don’t know what she’s yelling about.

The bus driver refuses to move the bus. We sit there for about two minutes while the driver yells at the kids that they must leave her bus if they use any more profanity.

We move on. The kids resume their conversation in more hushed tones. In the course of the continued conversation, one once again says “bitch.” One perhaps says “n—a,” not at anyone, just as part of the conversation.

The bus driver stops the bus, this time in the middle of the street.

She berates the kids and orders them off due solely to their “profane language.” She says she will call the police if they don’t leave.

I don’t expect my bus driver to be a constitutional scholar.

But then she calls the cops, so we continue to sit in the middle of the street, blocking traffic.

Two young cops come. They ask the bus driver who she wants removed. She tells them, but does not tell them why. The kids ask why they have to leave.

“Contempt of bus driver,” one cop says. I roll my eyes. “Trespassing,” he adds.

He threatens to use force.

Now, the kids are lucky. They encountered calm, albeit somewhat exasperated, not-yet-jaded officers. The worst the officers did was make up a crime to defuse the situation when they didn’t know what was going on. More importantly, the kids gave up and got off the bus—albeit because on their fully-protected speech, on orders of the police, on pain of force, all because of a bus driver enforcing her own little Constitution-less fiefdom.

I tried to have a polite conversation with the bus driver, who (unsurprisingly) told me I was wrong, asserting that she could kick anybody off who upset her. I didn’t push the point because I didn’t want to be the obnoxious yuppie lawyer who lectures a working-class public servant on what was demonstrably her turf.

But those kids were defenseless, and that public servant was not only wrong, but also itching to call the cops on them.

For something they had every right to say.