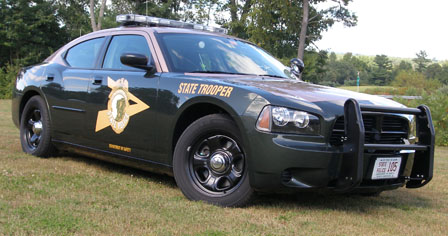 I have lived in New Hampshire for only a short time. At first I was impressed by the ‘live free or die’ tag on the license plates, but sadly, I have found this attitude is simply part of a tradition, rather than a real attitude that the people of New Hampshire hold. Just as in every state I have lived, the people don’t seem to mind being pushed around by the authorities in place, and put up with it just as they do everywhere else in this country. We allow our public officials to lie, and cheat in order to get ahead. The state police don’t even read Miranda Warnings for the most part. If you try explaining this to an attorney, however, you will get the response that they are the police, and you are the one that has been arrested. Basically the sentiment is that, regardless of if the police commit any miss-steps in legal procedure, or has lied outright, it doesn’t matter because they are the police, and you are the one having been arrested. How is this right? How is this tolerable? Most people would probably go with the idea that ‘it won’t happen to me, so I won’t bother being upset’. This could happen to anyone.

Lately it has been brought to my attention that Prosecutor Scott Ellis is even willing to stoop so low when giving advice to witnesses of crimes, or alleged crimes, that he has even told a witness recently that it isn’t within their rights to plead the Fifth Amendment – even though it is well within their rights as a United States citizen.

Prosecutor Scott Ellis went even further saying that the Fifth Amendment is for people who are lying. In other words, Scott Ellis lied directly to a witness with the intention of coercing said witness into providing the information that he wanted. Even more troubling to me is the fact that in this state, the prosecutor doesn’t have to be a lawyer.

Certainly, with having given the information that I have above, one can see where it would be a public service to make all prosecution staff lawyers and paralegals. Perhaps if this was done, the prosecution in Keene and elsewhere might have a reasonable knowledge of the law, and hopefully the Constitution of the United States. What other rights are being trampled on by those in authority positions? Are we really a citizenry that practices the ideology that a defendant will always be deceptive, and a police officer will always tell the truth? I can tell you that as a human being that this assumption is absurd, and more attention should be paid to the fact that our public servants are humans like us, which means they are just as capable of deceit. Furthermore, doesn’t anyone else find it abhorrent that a member of the prosecution would lie in order to coerce someone? It feels as if, in order to protect ourselves, that we must at least audio record any encounter with law enforcement, and that is a shame.

With have said all of this, isn’t it time that we as a citizenry start to care again? Isn’t it time we right our wrongs when it comes to civil servants? Apparently, we feel it is just fine that government officials openly lie to us, while we as citizens could be placed under arrest for such an indiscretion? I have been arrested on two occasions, and on both of those occasions at no point was I Mirandized. Does the Miranda Warning exist in New Hampshire?

On one of those occasions I was arrested for DWI. The arresting officer was very decent with me in person. We talked openly about the Dodge Charger he was driving and the speed it was capable of. At one point, in a non-emergency situation, with no emergency lights on, Trooper Michael McLaughlin told me we were doing in excess of one hundred MPH. He even went on to make comment that the car drove so smooth that the only way you could tell how fast we were going was because of the noise from the light bar atop his cruiser.

The trooper never gave me a preliminary breath test, and took me to the Newport police department where the breathalyzer there promptly malfunctioned. We then went to Valley Regional Hospital and had a blood test taken. The findings were .17 bac. When we returned to Newport, I was admiring the assault rifle on the ceiling of his vehicle. He took it out of its mountings and offered it up to me to hold and examine. After all of this, I thought, well, this is a pretty cool cop.

When I received the discovery for the case, he said that I had taken a preliminary breath test, and it registered .24 bac! I never took a PBA! How one goes from a bac of .24 to .17 in an hour is beyond me, but that is what he claimed in his report. I noticed that he failed to mention any of his indiscretions that evening, however, he had no problem making me look like a complete fool. I ended up taking a plea deal. During the deal, the prosecution Trooper Scott Ellis made a complete turnabout with the original police report.

He said that my BAC started out at .15, and then rose to .17, so instead of aggravated DWI, I was sentenced to a regular DWI. How is this change possible? Did Trooper Ellis notice the obvious lie within Trooper Michael McLaughlin’s report? If so, did he simply cover for the trooper, and change the report? Given that Trooper McLaughlin was obviously deceptive in his report was he reprimanded? I doubt it.

So, one point being made is: no matter how cool they are, you will probably find out they are not when you receive your paperwork, and B: Who is worse? Trooper McLaughlin for lying, or Trooper Scott Ellis for covering it up, lying to witnesses, and acting outside of the law?

This story was submitted by Joseph Cox.