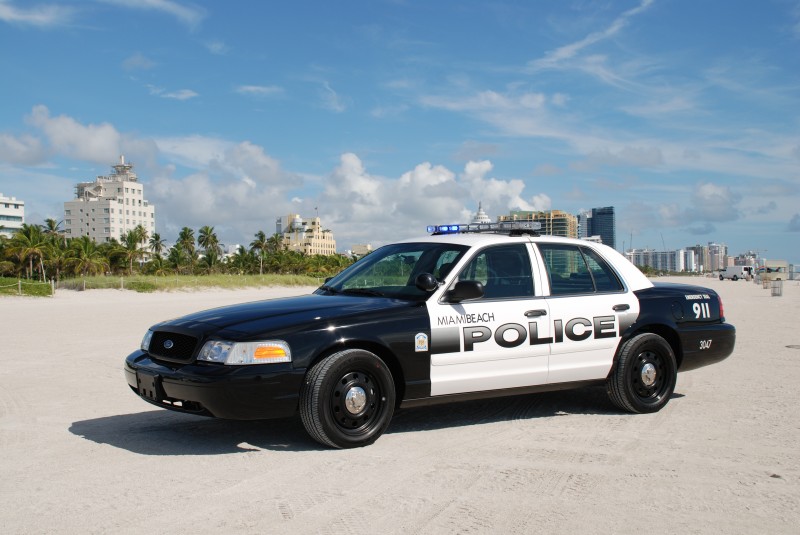 If you are ever on vacation in Miami, Florida, make sure you do not get lost. Especially in Miami Beach.

If you do, you may get pulled over by Miami Beach police officers, who will treat you rude and unprofessional, and scare your family, shining flashlights in their faces.

That’s exactly what happened to me, my 8 and 10 year old sons and my 11 year old niece, as we were driving in Miami Beach.

Having recently arrived in Miami, my second hometown, a city where I spent my very early childhood years, when my family moved from Rochester, NY after I was born, I took my family to eat Cuban sandwiches, then we went for a ride through South Beach.

Miami is beautiful, it is much different than what I remember as a child, but then again I was only 9 years old when we moved back to Rochester, so I wouldn’t remember much. Yes, I have visited a few times as an adult, but despite knowing how to get around, there are still parts of Miami that I don’t know, and can easily get lost in.

That’s what happened on Thursday, July 12th as we were on Lincoln Lane North in Miami Beach when I realized we were lost, and, as one normally does when one realizes one is lost, I pulled over to the side of the road.

I then noticed a minivan, in my rearview mirror that had pulled up behind me, very close to my bumper. The two men inside the minivan remained inside. I then attempted to back up but couldn’t as the van was literally on my rear bumper. I motioned to the driver to back up so I could get out, but he refused to do so.

At this point is when I remember the following: First of all I’m a tourist in a major city, Miami, the “Gateways to the Americas.” Second, my rental car definitely stands out with green “Vermont” plates, so naturally the thought crosses my mind to be careful not to become a crime victim.

Finally, after several times going back and forth, I’m able to get out the parking spot and do a “k turn” on the street to go back the way I came. Then, as I turned left on the next street, Drexel Ave. I immediately see a vehicle coming directly at me. It is then that I realize I am driving the wrong way on a one way street. And, as I try to go in reverse, it is then I see two Miami Beach police officers on bicycles with flashing lights behind me.

Miami Beach police officers Eric Dominguez ID # 041 and W. Thomas ID# 050 approach my 2012 Chevy Malibu on both sides. Officer Dominguez accuses me of driving reckless, shines his flashlight in my face and asks me for my driver’s license, registration and insurance. I try to explain to him that we are lost and that I decided that if I drove back in the same direction we came, tracing our path, perhaps I could find how to get back to our hotel. I tell officer Dominguez that I am from Rochester, a small city and being that Miami is so busy, I couldn’t seem to get back on track. Officer Dominguez, in a very rude, curt manner replies “Really? Miami is busy huh? Only Miami is busy”? then shakes his head as he lets out a exasperated breath.

At this point, the man who had pulled up behind me approaches the officers and I hear him say “Thank you officers.” The man then stares me down. I ask the man what is he thanking the officers for, and I tell him, that we were lost and I was simply trying to turn around. The man just looks at me and smiles. Then , officer Thomas approaches the passenger side of my car, where my 11 year old niece is sitting, shines his flashlight in my face, and says “Shut up, you are lucky we are being kosher with you because you have children with you, otherwise you’d be in handcuffs.”

I think it was at this point where it hit me that I was dealing with two very unprofessional Miami Beach police officers, so I go into my “document everything mode”, making sure to remember what they say, and get there names. Well, the name part was easy. You see, after almost a half hour of sitting in my car and being treated rudely and unprofessional by Miami Beach’s finest, who had terrified my family, having my young sons and my niece scared believing their father and uncle was going to jail over an honest mistake, a simple traffic infraction, officer Dominguez comes over, and hands me a computer printed traffic citation for $ 179.00 with before telling me “You can pay by mail or in person”, then walking away.

Knowing I would be filing a complaint against the officers, I then ask officer Dominguez if he and officer Thomas have a card with their names, to which he replied “Don’t have one, they’re on the ticket.”

After calling and asking that a supervisor with the Miami Beach police department call me, Miami Beach police Sgt. Chong calls me about an hour later and after I explain to him the incident, Sgt. Chong, in a very courteous and professional manner not only listened to me, but basically told me that the kind of conduct on the part of his officers that just described to him is something he does not condone nor approve of, and that he would be talking to the officers.

I tell Sgt. Chong a little about my work, and explain to him that what really upset me is the negative impression that officer Dominguez and officer Thomas made on three young children. Three young children who although every day I am finding it harder and harder to believe, I tell them that there are good police officers who treat people with respect. Who are corteous. Who are professional.

Then they see officers like Eric Dominguez and W. Thomas and the negative lasting impression that is left on their minds is the complete opposite of what I tell them about good police officers.

And here’s the best part… something told me to google Miami Beach Police officer Eric Domiguez’s name, you see the way that he treated me and my family, scaring my young niece and my sons, I had a feeling that officer Dominguez may have a history of misconduct, and I was right.

You see,  Miami Beach Police officer Eric Dominguez, ID # 041 is the same officer who in March of 2011 was caught on video speeding on the sand in South Beach so fast, that at one point his car goes airborne. After the video went viral, officer Eric Dominguez was suspended for 40 hours and was banned from driving a police cruiser for 2 years, which is why he was on bicycle patrol when he pulled me over.

And to think that officer Eric Dominguez had the nerve to accuse me of driving recklessly and give me a $ 179.00 ticket, when he himself can’t even drive a police car is ironic.

Here is a link for the original story of Miami Beach Police officer Eric Dominguez’s suspension.