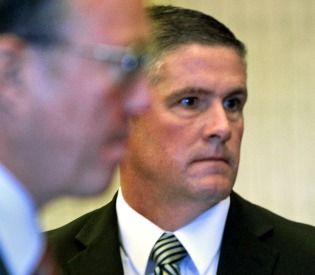 Lynn, MA – This July, a District Court judge continued without a finding motor vehicle charges filed against a State Police captain who Saugus officers said had beer bottles in his unmarked cruiser and alcohol on his breath last November following a late-night pursuit.

The ruling by Judge Albert Conlon went against the recommendations of Essex County prosecutors, who wanted a guilty finding on charges of failing to stop for police and negligent operation, a $100 fine and court-ordered alcohol screens, a spokeswoman for the Essex District Attorney’s Office said.

Under the sentencing and probation terms, the charges against McCarthy, said District Attorney’s spokesman Carrie Kimball Monahan, are dismissed if he is not charged within the six-month time period with a new crime.

If he is charged, she said, McCarthy could be brought to court and found guilty on the negligent operation and failure to stop charges.

She said McCarthy would also be found in violation of probation if he is charged with a new crime.

The state police captain who yesterday admitted prosecutors had enough to prove he was guilty of leading Saugus cops on a late-night chase could be back patrolling Bay State highways in days after a judge gave him a break, state police and prosecutors say.

Saugus Police Officer James Scott’s report said McCarthy led Scott and other officers on a pursuit down Route 1 and in Saugus on Nov. 19, 2011. Scott noticed the smell of alcohol on McCarthy’s breath, according to Scott’s report, and officers found an empty beer bottle and two unopened bottles in what State Police last November described as McCarthy’s unmarked cruiser.