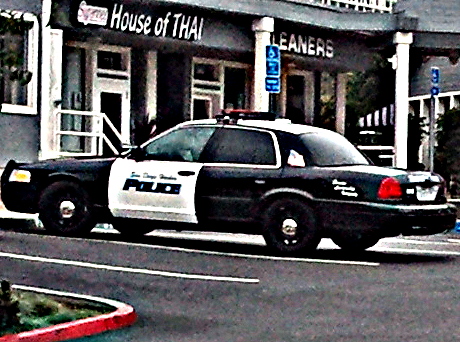 Despite the outward pretense of civility and denunciation of human rights abuses, this is a country whose police murder disabled old people, the mentally ill, and children – and get away with it. It is a country whose government actually defends the police when they yank little girls out of beds and put guns to their heads during mistaken drug raids. This is a country whose police arrest people for feeding the homeless. This is the country with the highest number of prisoners in the entire world, both in sheer numbers and on a per capita basis, even as it constantly claims to be the “freest” place on the planet.

The list goes on and on – you’d think the United States would be hiding its face in shame, rather than claiming to be a beacon of freedom while pointing the “human rights” finger at every other country but itself. While police apologists repeatedly drone the tire bit about it being “a few bad apples” or “isolated incidents” (never mind the fact that the law actually encourages and permits this type of behavior by police), the truth is, it would take more than a whole team of writers to detail and cover the daily atrocities committed by police.

Aaron Rosas’ story is one such atrocity.

Not so long ago, a few days before April 13, 2012, Aaron Rosas called his mother Alice to ask where she’d stored his camping equipment, as he wanted to camp out with his friends for a night. On April 13, 2012, Ms. Rosas received a call from Sierra Medical, a hospital on the east side of El Paso Texas around midnight. She was told she needed to go to the Del Sol Hospital to meet up with her son, because they were transporting him to Del Sol, a trauma center.

Her son had been shot 5 times, because in this country, some police believe the punishment for underage drinking is death.

Some young folks, many between the ages of 17-19, had gone out into the desert. There was a bonfire and some drinking taking place on private grounds which used to be an old denim factory/warehouse. Aaron and his friends had planned to do a little drinking, then camp there for the night. At one point, Aaron thought better of the situation, and decided to go home. He was in the car with one or two of his friends and another girl.

They were parked in the dark between 2 other vehicles, and he saw a car approach. He observed the vehicle approach the gated property from a distance. He and his friends thought it was someone joining the party, and didn’t think much of it at first. Aaron turned his car on,  but realized the approaching vehicle had turned on a spotlight. At this time, he still couldn’t make out much of the vehicle. As his car was moving forward, he suddenly saw sheriffs running towards another car. He stepped on his brake, turned to get a better look, and was shot 5 times. He was never told to get out of the car. He was given no warning.

At some point, the sheriffs realized that this could look bad. They had essentially gone out looking for trouble. They were on private property and had known underage kids were likely drinking there, so it wasn’t like they stumbled upon some dangerous, surprise situation which would call for such fatal measures. They crept up in the dark, took an unsuspecting 19-year-old by surprise, and unloaded on him. As much as cops know damn well that they can get away with murder, they started to think this might not look so good, and so began the lies.

Ms. Rosas arrived at the hospital and waited in the emergency area for the ambulance to arrive. As her son was brought in, she overheard the ambulance personnel mention gun shot wounds. She approached a sheriff who refused to explain the situation to her. The head ER nurse led Ms. Rosas taken to a conference room, where she waited until 2:00 a.m. Eventually, a sheriff asked her to sign a release so the police could obtain Aaron’s medical records – because Aaron himself was sedated and could not consent. Ms. Rosas (wisely) refused, as she had yet to receive any explanation of any sort from anyone involved.

Again, she waited. When she emerged from the room to inquire as to what was going on, a nurse said the sheriff did not require her signature after all, since her son was 19 years old. She was also advised that her son was now gone. The sheriff had taken him to an undisclosed room in the hospital. The nurse claimed not to know where in the hospital her son had been taken. Ms. Rosas, out of fear and desperation, went floor to floor looking for her son. On the 5th floor, she again asked for her son. The head nurse explained Aaron had been shot by the sheriffs, which was the first time Ms. Rosas was actually apprised of what had occurred that night.

Apparently wary that the nurse might say too much, a detective approached the nursing station, and said he was going to ask Aaron questions. Aaron had been in the hospital for 5-6 hours, and had not gone into surgery for his wounds. From what Ms. Rosas observed, it seemed he was actually removed from the Emergency Department, and transported to the 5th floor so that he could be investigated by the police.

Ms. Rosas immediately represented a lawyer was on the way.  Her son’s attorney, Mike Cervantes advised  everyone at the hospital to tell Aaron not to talk to any police. Ms. Rosas waited for her son to come out of surgery, but discovered Aaron was taken under custody immediately after surgery. The sheriff’s deputy prohibited her from seeing him.

The sheriffs predictably began their propaganda campaign early the next day. The sheriffs made a statement to the media, claiming Aaron’s car had clipped the officer’s car, and the sheriff unloaded on him because he felt he was in danger (even assuming this ridiculous lie is true – can you imagine if everyone started shooting every time someone else clipped their car? And what kind of police officer actually fears for his life because of a minor car accident?).

Later on, the sheriffs changed their story just a bit. They told a KFox reporter that Aaron’s vehicle was driving toward them, and they feared for their lives. Later on that same day, they issued yet another statement claiming an officer was hit. Finally, yet even later in the day, they claimed 2 officers were hit. According to Ms. Rosas, when he finally went to court, he allegedly had hit 3 officers. His bond was set at $1.5 million – $500,000 for each officer.

Aaron was in the infirmary when his bond was set. He panicked, he was horrified, and he did not understand why his bond was so high. Indeed, he probably had no idea what he had even done wrong.

30 witnesses who were present back Aaron Rosas’ version of the events, but the word and testimony of police might as well be the word of god. This the way it works in America. Police beat, maim, and kill innocent people, and then claim to have feared for their lives, thus apparently justifying all kinds of disgusting behavior. Here, the two deputies who “feared for their lives” have minor injuries, while the person who allegedly committed two counts of aggravated assault was shot five times and nearly died. Common sense would lead one to question the police version of events, but of course most of America (fucking idiots) will not.

Aaron is currently at home now. His bond was fortunately reduced to personal recognizance. He is currently unable to walk due to his injuries, although he is expected to improve and eventually be able to walk again. Ms. Rosas is understandably crushed. “These people don’t understand…if they had just pulled him out of the car, even yanked him by the hair – not that it would be ok to do that, but to shoot him like this? I can’t understand why they would do that.”

Aaron’s attorney, Mr. Cervantes, believes a civil suit against the sheriffs will likely be successful, and that forensic evidence will be extremely helpful.

“I don’t believe the sheriffs realize that when they engage in this kind of behavior, they are not just destroying one life, but many. The anxiety that one goes through just because they do what they do. I don’t understand how they can lie about this.  I don’t believe anyone deserves to be shot when they are not fighting.” She believes Aaron requires some emotional attention or help, as he has become depressed.

Aaron had just turned 19, and was no longer under her insurance. The medical bills have been incredibly high, and Ms. Rosas, who works as a fundraiser for various organizations, has struggled financially. The incident has changed her perspective on police. She recalled the Rodney King incident of the distant past. “I read about it, but it was so far away, and didn’t happen here. I started reading a lot of things about how many people had such an unfair shake with the law, and it’s unbelievable. It’s an epidemic, where the officers are taking the law into their own hands, and then they stick together.”