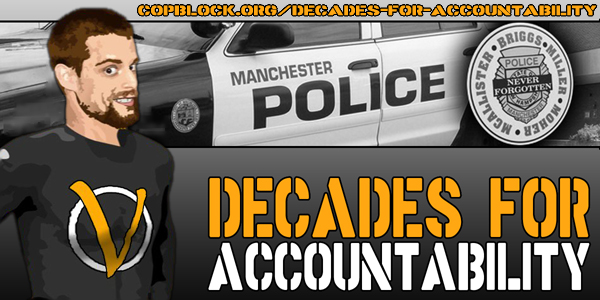 Update – August 14th:
The State is an Autoimmune Disease [post] by Thomas L. Knapp at C4ss.org

Update – August 14th:
Founder of CopBlock.org gets jail for wiretapping [post] from our good friends at PoliceOne.com

Update – August 13th:
NH activist gets almost 3 months for wiretapping [post] via SFGate.com by way of the Associated Press

Update – August 10th:
Ademo Gets Visited by Michael Valentine [post] update from Ademo days prior to his trial

Update – August 8th:
Journalist faces 21 years in prison for reporting on police abuse in New Hampshire high school [post] by Zach Dyer in the Journalism in the Americas

Update – August 7th:
Journalist Facing Prison for Reporting Police Brutality a 3-min video by YouTube.com/SourceFed – a channel that has over 500,000 subscribers and 160,000,000 views. Solid.

Update – July 29th:
Ademo requests two copies of The Most Dangerous Superstition by Larken Rose be sent to Valley Street Jail – one for him (that he’ll pass-along to someone when he leaves the facility) and one for someone else in the same pod who seems receptive to the ideas of complete liberty. Larken agreed, and even ate the cost for one of the books – he not only is an excellent communicator but more than almost anyone, walks the walk. Much thanks Larken, for this and everything you do!

Update – July 28th:
CopBlock.org/FreeAdemo tab created – will point to this post (http://copblock.org/pledge) and CopBlock.org/DecadesForAccountability [about his wiretapping charges]

The first had him sitting in Valley St. Jail for 12mo with 6mo suspended for two-years of “good time” hanging over his head, which if violated (for any level charge in or outside the ‘shire) would have incurred a 1-2yr stint at the prison in Concord. Also, a no-contact order for the three public officials with whom he spoke. Ademo declined.

The second was the same minus the 12mo in Valley St. Ademo declined.

The DA is going to “talk with his boss” and is supposed to visit with Ademo on Monday with another deal. Meanwhile, Ademo will have the weekend to think about what might be acceptable to him so he can put this latest legal land bout behind him and move forward with his life. All in all, he seems in good spirits.

Update – July 26th:
Ademo said he could use some liberty-oriented books (stories) if anyone feels so inclined as to send some his way. He would very much appreciate it. Once he has read them, he would leave them for other prisoners to read. All books must be sent new, directly from the publisher, via USPS to:

Update – July 25th:
Ademo was not transported to court for his pre-trial conference – it has been postponed until Friday, July 26th. Court personnel claimed they didn’t know he was at Valley St. Jail, despite the fact that he was taken from that location directly to Valley St. Jail on July 11th [see: copblock.org/pledge] and multiple calls made to the court to confirm they knew of his location.

Ademo is supposedly now going to have that trial management meeting on Friday. Thanks to everyone who made the drive from Keene and those who turn-out from Manch to support Ademo today. Pretty redic how this unfolded. Seems part of a pattern…

Another student filmed the interaction with his cell phone as his classmate was slammed to a table by School Resource Officer Darren Murphy. After viewing the video that public officials told the recording student to delete, Mueller called the Manchester Police Department and West High School seeking comment. Mueller publicized a video on CopBlock.org about the incident which included segments of his conversations with the on-duty public officials.

Almost three months after the altercation at West High School occurred, Adam was indicted on three counts of felony wiretapping, each holding a maximum sentence of seven years in prison. Mueller is ordered to appear for jury selection at the Manchester Superior Court on August 6, 2012 at 9:00AM, and the trial is expected to occur within the two weeks following jury selection.

NH statute states that to be guilty of wiretapping, another party must have a reasonable expectation that their communications are not subject to interception. A public official who is on duty and in a public space has no expectation of privacy, as is reinforced by the First Circuit Court of Appeals in Glik v. Cunniffe in a ruling that states that the First Amendment protects the right to record police in public.

Individuals throughout the country have publicly expressed their support for Mueller’s actions and voiced their recognition of clear double standards. “No matter what, nobody’s child should be abused like that in school,” said the father of the student thrown to the cafeteria table.

Defensive or Offensive? That is the Question…
January 20, 2012

For more background on this situation check out the playlist: Ademo Caged in Manchester, NH 234
SHARES
FacebookTwitterGoogleRedditTumblr
DiggLinkedinStumbleuponMailPrint
You Can Support Cop Block by shoppping on Amazon using the banner below:
BANNERS ARE CLICKABLE