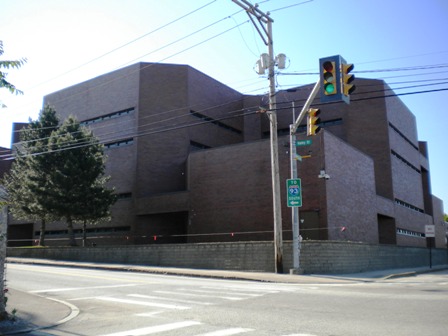 Today is July 23rd, my 12th day (of 60) in Valley Street Jail for resisting arrest. They (my captors) claim this is the Hillsborough County House of Corrections, but I’m failing to make such a connection. Every day my 40+ roommates and myself are brought food, which we didn’t cook, handed clean laundry, which we didn’t wash, and even have the channel on the TV changed for us. Sure, there are some programs like AA, GED classes, and a class where you can learn English – but nothing actually focuses on correcting the inmates’ behavior.

My first cell, while I was in “classification” status, had a view of the flat roof, a bare space with rocks and vents on it. I couldn’t help but think how great some raised garden beds would do up there. Also, if this place really wanted to replace bad behavior with “better”(or more productive) behavior, it would be great to teach inmates how to grow their own food. Of course, I state this overlooking the fact that most inmates I’ve encountered wouldn’t be here if the War on Drugs didn’t exist. How about letting some of these guys out to make their victims whole? Inmates who stole without using force or violence could be working off their bad deed directly to those they’ve harmed. Instead, we sit in our pod and have everything done for us.

Aside from the lack of responsibility we have for everyday basic needs, we, the inmates, are hassled regularly for silly things. For example, every time an inmate leaves his cell, according to the jail staff, he must make his bed, both sheets must be used, the jail-issued blanket must be on top and all four corners have to be tucked in. Anything less will get you written up and could possibly cost you “good time” – your opportunity for early release. The other day, my cellmate and I were “warned” for having books and a deck of cards on our desk. You can not have anything other than the Bible on your desk when you are not using it. Another corrections officer made us move our toothpaste from the desk to our shelf – again, stating, “next time you’ll be written up!” Some other rules I’ve learned while being here are:

-You can’t have more than three books in your cell.
-No more than 10 letters in your cell (This is one that I violate, considering I don’t know where to send the extras. The jail will not hold them with my property for me.)
-When the nurse is in the pod, no one is allowed to speak.
-You must walk on the right side of the hallway.
There are many more…

In case you missed my point, this place is a joke. I’ll spend 40-60 days (“good time” pending) in a frat house, where people are picked on, dirty jokes are made regularly and men act like boys. Don’t get me wrong, this place can be serious business. The childish games turn serious at times with nasty results, or a C.O.’s constant nagging can lead to a lockdown, or beat-down. At the end of the day neither side is better.

The inmates lose, the officers lose and the tax-payers fund it all. It’s the most wasteful use of time, money and life I’ve ever seen. Due to the systems idea of “correction” most will come back to these walls again, after their release – and that shouldn’t surprise anyone. When an inmate is released, he has spent his whole sentence waiting – not correcting. He hasn’t had to cook for himself, do laundry or provide for himself at all. Therefore, once released what do they do? They try to provide for themselves, but have not learned anything the state deems responsible behavior. So, they resort to what they know – drugs, booze and robbery… and back home, where they’re taken care of.

I have several ideas on how to fix these problems, but I’ll spare you my thoughts. Just know that the next time you pass your local jail or prison, the people inside aren’t all bad. In fact, few are. Know that no debt is being paid and no corrections are happening to those inside. Jails are here to put fear into those who haven’t been subjugated to them, and to control those who see them for what they are. I hope you take a better look at what this system deems justice, because I’ve yet to find any here.