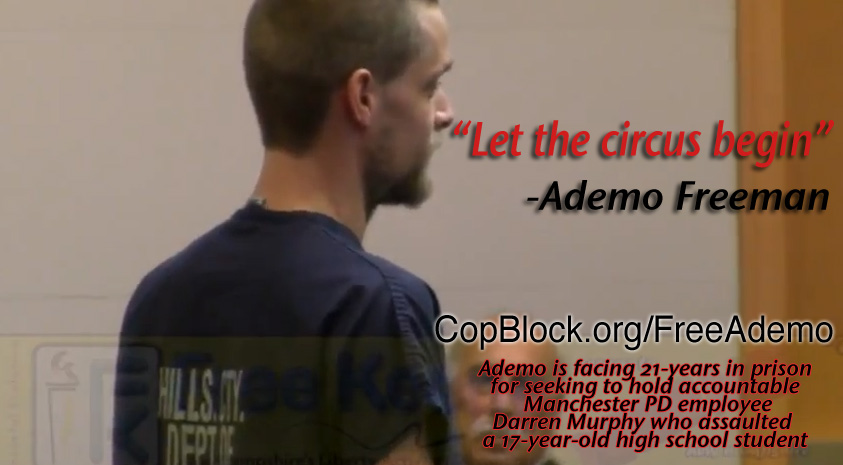 This post was written by Ademo Freeman and transcribed by Clyde Voluntaryist of NeverTakeAPlea.org:

Yesterday, July 27th, I was transported from my cell at Valley Street jail to my final pre-trial conference regarding my felony wiretapping charges. While there, I took the time to point out that the “state” regularly cuts deals with people who have actually harmed others, yet seems dead set on having a trial for my bogus charges, charges that could land me in prison for 9-21 years. To see the entire hearing from Friday, click here.

While in the court, I asked the judge why I hadn’t been offered a plea deal and Mr. Brown, the “judge,” suggested the state offer one in order to resolve the matter before trial.

Shortly after I left the court room, Michael Valentine, the DA, came to see me in the basement of the courthouse. He brought with him the “state’s” plea deal which was 12 months in Valley Street with 6 months suspended, meaning I wouldn’t have to serve half the time unless I messed up according to their arbitrary rules. He also wanted 1-2 years of prison time, which would be suspended for two years, and no contact with any of the three people I “wiretapped.” I told him there was no way I’d take a plea that involved any amount of time behind bars.

We went back and forth for several minutes on a number of things but the conversation ended with Michael saying he’ll come visit me in Valley Street on Monday, July 30th. Over the weekend, he said he’s check with his “bosses” and the “victims” about a 1-2 year prison sentence, which would be suspended for two years pending good behavior – something I wanted clearly defined.

Here’s how I see the offer: it’s a stellar deal if I actually thought what I had done was wrong. If I were facing 9-21 years for anything else and was offered a 1-2 year suspended sentence, I’d sign it immediately. And it should be noted that having two years of good behavior is no big deal because I have the same terms for the next two years (or I return to Valley Street for ten months) on the resisting/chalking arrest. So, that really doesn’t matter.

Yet, by the time this is published to CopBlock.org and other blogs, I’ll have refused Michael’s offer and here’s why. First, I can’t go against my principles and sign a deal that says I acknowledge my actions as wrong or illegal. Second, I’m not a hypocrite. How can I advocate refusing plea deals and sign one myself? I don’t judge anyone who has taken pleas because each case/charge is different. Third, I am confident I can show a jury, with facts and logic, that I shouldn’t be caged for my actions.

So, unless Michael Valentine or the judge decides to drop my charges completely, I say, “let the circus begin!” I know this choice could end up with a guilty verdict and those mentioned above could give me worse than the plea deal, but just like I said in my video blog before being caged: “My mind is free and my conscience is clear. I haven’t harmed anyone and I’ve done what I feel is right.” Let me add, I’ll be an activist of freedom no matter where I live, until the day I die.

I want to thank everyone who has shown and continues to show me support through these recent cases and I hope to see a packed courtroom August 13th for my trial.

Call Michael Valentine and Kenneth Brown and encourage them to drop the threats levied at Ademo: (603) 669-7410

To help Ademo & learn more about his situation visit: http://copblock.org/freeademo

Ademo has jury selection on Monday, August 6th. Friends plan to be on the ground to show support and do jury outreach – inform them of their ability to nullify bad laws [Facebook event].

Both the outreach and trial will be held at: