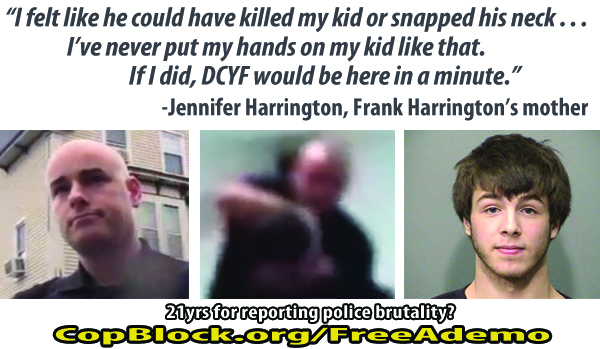 Ademo today was visited by Michael Valentine, the individual who, on Monday at Hillsborough County Superior Court will argue that he should spend 21-years caged because he pointed-out the assault of 17-yr-old Frank Harrington by Manchester PD employee Darren Murphy.

Valentine plans to submit into evidence Admeo’s radio interview with Girard at Large captured in-studio on December 6th of last year due to this statement from Ademo:

Though I didn’t state to the individuals I was audio and video recording them I did state to them that my name is Ademo Freeman from CopBlock.org and I’m seeking comment off of Officer Murphy’s actions in the cafeteria.”

In that same conversation Ademo also pointed-out the fact that:

I’ve highlighted some abuses of the police around here and now I’ve become a target. . . Who are they keeping the community safe from? Me? I’ve never touched a 17-yr old kid and slammed his head on a desk. . . We’re talking about public officials . . . every one of their jobs is public information. If their whole job is on the record how can you wiretap them?

Download this mp3 to hear the full on-air conversation

Valentine noted that if the jury reaches a “guilty” verdict he’s encourage “judge” Kenneth Brown to order Ademo caged for six months at Valley Street Jail to be followed by two years of “good behavior”, which, if violated, would subject Ademo to 1-2-years in the prison in Concord, NH. This is the same scenario as Valentine offered in the first of two plea deals to Ademo, both of which were turned down.

Valentine did note that he was receiving a lot of calls (his number is 603-627-5605) from people encouraging him to drop the threats levied at Ademo. He also noted that some callers had threatened him. Ademo expressed his encouragement that people refrain from such statements, both because it won’t help him in his situation and it may actually put them at risk if Valentine and his colleagues take interest and follow-up. Instead, Ademo encouraged people to demand of Valentine that his charges be dropped and that in the very slight chance that a “guilty” verdict is reached that Valentine request no jail time.

And lastly Ademo noted the importance of clogging the court system – “I can’t do it on my own.” Difficult as it may be, if you are now or in the future told to pay a ransom or threatened with a cage for an action that harmed no one then stand on your principles. Make your case in front of a jury of your peers. Ensure they’re informed about jury nullification. Even if you’ve acted in a way that some scribbles on paper dictate you shan’t, if you’ve not harmed anyone then it’s not you but that text that’s in the wrong. Will it may be easier to slip some FRNs into an envelope and move on, know that such actions only fund the same criminal organization that’s now targeting Ademo and does nothing to deter future harassment of yourself, your family and those in your community.

If you don’t stand-up today and act according to your conscience it’ll only be more difficult to do so tomorrow. Ademo has court on Monday, August 13th
Jury outreach begins at 8am
Trial begins at 10am

Don’t Take the Peal Deal tri-fold – print and distribute to those entering county, state, and federal courthouses. Currently over 95% of cases are settled before going to trial. Just think how clogged the criminals justice system (not a typo) would become if even 10% of us took our cases to court.