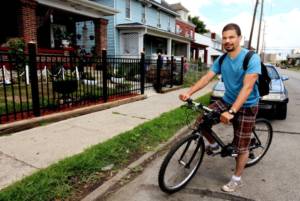 Ohio – Columbus police mistook Gregory Phillips for a suspected rapist, handcuffed him as he sat on his bicycle and questioned him in front of a crowd on Sullivant Avenue. What really makes the Franklinton man angry is that those officers left him 10 minutes later without an apology for arresting him and ticketed him for riding a bike on the sidewalk. Phillips calls that a cheap shot because he rode up onto the sidewalk to get out of the way of police officers he thought were after someone else.

Phillips, 45, was pedaling home at 7:30 p.m. on June 8 after visiting a friend at the Cultural Arts Center Downtown. Near S. Davis and Sullivant avenues, a marked police SUV pulled past and blocked the street in front of him. Others pulled up around him.

Phillips was not surprised by this. “A lot of crazy stuff goes on on Sullivant Avenue,” he said. It never crossed his mind that he was their target. Why would it? He has owned his house on S. Cypress Avenue for 13 years, belongs to the local homeowners’ association and works as a web developer for Columbus State Community College. He had no criminal history in Franklin County.

He was not William Ferguson Jr., a 48-year-old man who was being sought in Franklinton that night on a rape warrant.

“Before I could even get off the bike, they put me in handcuffs,” he said.

An officer showed him a photo of Ferguson. Police said they had been tipped that Ferguson was in the area in a blue shirt and tan shorts. Phillips was wearing a blue shirt and plaid shorts.

Ferguson is 5 feet 11 inches and 188 pounds, according to court records. Phillips is 4 inches shorter and 38 pounds lighter.Phillips offered his debit card, employee ID, driver’s license and two library cards as proof he wasn’t Ferguson.He allowed officers to search his backpack, which held half of a burrito and a bottle of water. He said they seemed frustrated that they could not find anything illegal.“They were searching for a reason to take me in, and they didn’t have one,” he said.
Before letting him go, Officer Brad Forster wrote the citation for “bicycle on sidewalk — riding.”

“That was the icing on the cake,” Phillips said. Phillips filed an internal-affairs complaint that night but learned in a July 11 letter that it would not be   investigated because “the allegations forwarded by [him] do not meet the Division criteria for a classification of misconduct.”

Internal Affairs Sgt. Marc Helder noted that the circumstances, taken with Phillips’ appearance and actions, were enough to warrant his brief detention and that the officers did nothing wrong.

The sergeant wrote, “There is no Division Directive requirement for officers to apologize in cases of mistaken identity.”

Phillips said, “That statement was sort of issued by a robot.” Last week, however, Sgt. Rich Weiner, a Police Division spokesman, said: “Even though there is no division directive requiring us to apologize, … we should. It’s a very tough job, but that does not relieve us from the responsibility of treating everyone with respect.”

Weiner said the officers initially thought they were dealing with a potentially violent rape suspect and might have viewed Phillips’ move to the sidewalk as an attempt to flee.

“Immediately we are going to gain control of that individual,” he said. “We don’t know why he’s avoiding us.”

Phillips is fighting the ticket. The court date is scheduled for Aug. 29.

“It’s a shame that something like this would even clog up the courts,” he said.

Police arrested Ferguson a few hours after Phillips was detained. He is awaiting trial on two counts of rape and two counts of gross sexual imposition.

“Around here, a lot of people don’t trust the police,” Phillips said. “I don’t want to be one of those people.”